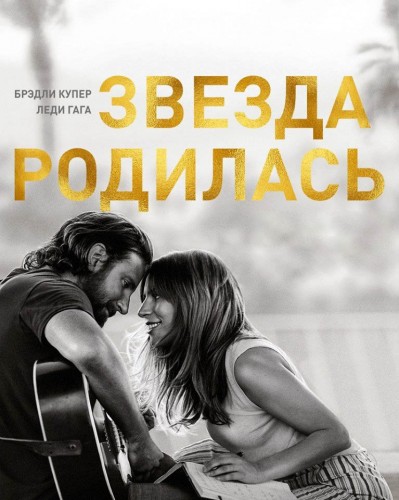 "A star is born" is the fourth interpretation of the classic fable about love and show business. The plot is reminiscent of all previous versions, but basically it is an updated version of 1976 with the use of rock music and songwriting. Like musicals, this painting uses songs to tell the story.

Version 2018 with the participation of Lady Gaga, and Bradley Cooper is a stunning, romantic musical about the dangers of "night" success, abuse of psychotropic substances and alcohol, and also about the personal tragedies of stage veterans who see that their fame is eclipsed by new young talents.

Jackson Maine (Cooper), an aging rock-n-roll musician who often drowns herself in alcohol swamp nightlife. After a successful concert Jackson wanders into a bar to drink. By coincidence, in the same bar sings our heroine Ellie (Gaga). Maine immediately attracted to the beauty of the girl and her singing talent. Jackson goes backstage to meet her, and their story begins ...

The film is full of sharp emotional scenes, each of which is spectacular due to the strong cast. You will hate Jackson and his decisions, but at the same time, you will empathize with the broken man he is.

Bradley Cooper not only starring, he also acted as Director. This picture, in fact, became his debut in a new role.

A star is born emotionally. And her joyful, triumphant moments are perfectly balanced with a painful sorrow. When one star is lit, the other extinguished.

This is a beautiful and sad story about love and the sacrifices that you have to bring for the other person. And it's probably one of the best films of recent years that should not be missed.