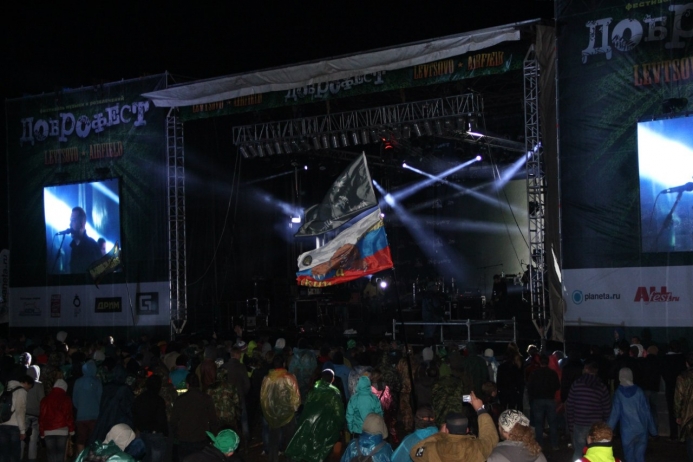 This year fans of rock and alternative music can heartily rip Levtsovo airfield, near Yaroslavl, where will be held the 6th music festival Dobrofest. It will take place from 26 to 28 June this year under the slogan "Three days two nights".

Every year a party under the open sky, gaining momentum, invited a growing number of well-known musicians and new young talents.

In the moment is actively preparing for the festival, therefore, the organizers have already pleased us with a list of chips that must be present during the event and also presented a preliminary list of artists, which continues to grow. And from March will start accepting applications for the second stage. So, according to preliminary results, this year on the main stage of the 6th festival Dobrofest will be:

The festival organizers are trying to accommodate the wishes of the audience, and, as we can see, every year on the territory of the event, new facilities and amenities. From what has been in past concerts and it is planned to keep and expand:

weddings. On the 5th Dobrofest took place over 80 "registrations", and therefore popular wedding used. This year plans to open accepting applications in March;

-regular bus, which you can go even late at night and early morning. To walk they will more often every 10-15 minutes, let them before,with seven Friday morning;

-food for every taste and wallet;

-last year for the first time at Dobrofest has installed the camera storage, which could use some hundreds of people;

organizers hope that will re-supply station for charging different devices and devices;

-those who were at last year's festival, remember that due to the weather showers remained unclaimed, but that is no reason to abandon them this year;

from sporting events will be soccer and volleyball, what other sports will join them, will be announced later;

-shop with merch of the festival.

And now about the innovations and improvements at the site of the festival Dobrofest:

-there will be a third stage with GarageBand, which can be any desired;

-there will be a special selling point of water at an affordable price, as well as a stall with fruits and vegetables;

-there is the probability of the hotel-partner that will provide discounts and different pleasant things the guests of the festival;

-the organizers hatched the idea to do in the camp streets, neighborhoods and unique communities and embassies;

-entrance to the festival and ticket office is scheduled to open much earlier, around 7 a.m. Friday;

-be introduced to the use of special purpose software, which together with increased staff of assistants will solve the problem of standing in line, namely not more than an hour at any of the ticket;

-increase the number of toilet stalls;

-it is also possible that the organizers will construct a special paid area clean with comfortable booths, sinks and toiletries.

We have listed is not a complete list of pleasant and positive things for future events.

The organizers of the Dobrofest always open to new constructive ideas, they are willing to accept and consider or on the official festival website, or in a group in Vkontakte.

We're going this summer at the Dobrofest. And you? :)