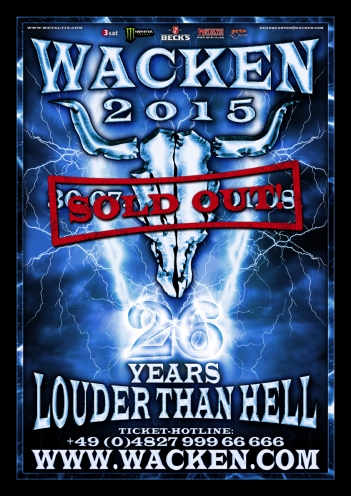 Every year since 1990, in early August, the North of Germany shakes from the rumble of bass guitars, crashing drums and heavy rock festival, Wacken Open Air, which passes near the town of Wacken. Last year's feast of metal celebrated its 25th anniversary.
The scale and coolness Wacken confirms the fact that the tickets are not that diverge like hot cakes, and downright magic wand. Last year ALL tickets for the festival 2015 was sold out within 12 hours of entering them in the sale!
You just think about the scale of the event: 240 hectares, 75000 persons (together with nearby territories 108000 people), 120 groups of 7 scenes
over 100 points of sale of food and just a huge number of a lot of beer!
Already confirmed the performance of the 105 groups, including Oomph!, Within Temptation, Cradle of Fifth, Cannibal Corpse, Sepultura, In Flames and many others.
This year festival dates: 30 July - 1 August. The festival deals with the whole organization ICS Festival Service GmbH. State employees involved in the event in 2015 is 5,000. Performances are held almost non-stop: from 11 am to 3 am.
Experienced visitors are recommended to prepare for the trip to the festival much in advance, that is, for 9-10 months, otherwise you can just stay without tickets, and their organizers released fairly limited for an event of this scale number is about 60 thousand. In addition to tickets, the stumbling block may be the visa to Germany. To her own problematic. To resolve this issue, you can contact the travel Agency that organises tours in this case, all the troubles related to the visa, accommodation and other organizational aspects firm takes.
However, such difficulties do not stop a real metalworker, and the reward for perseverance will be tons of live rock present, the opportunity to hang out on your favorite groups on all cylinders and valuable gifts at prices that in Russia in the afternoon with fire not to find.