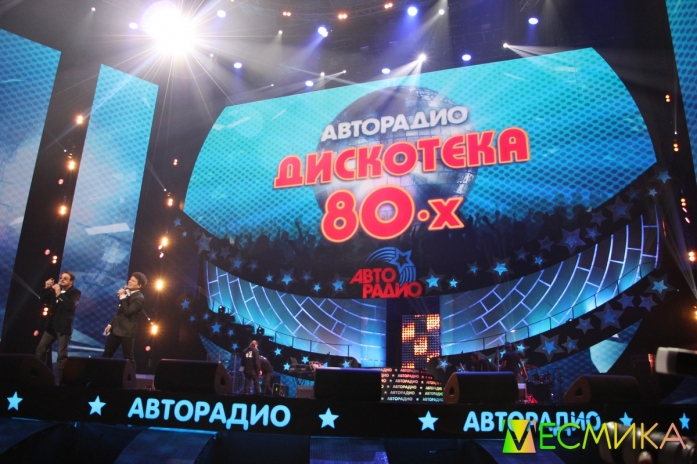 Imagine that one day can become the most vivid memories from the 80-ies. Dozens of artists whose songs were played at the discos of the Soviet Union. These are sometimes prohibited, but still favorite voices. Once a year, the radio station Avtoradio collects in the Olympic stadium tens of thousands of music lovers of those times to the Disco 80s.

How to get to the festival:

Given that the festival is held annually in Moscow, it is enough to come to the capital of Russia in any convenient transport, however, if you choose a car - then be prepared for the fact that the Parking place will have to look long, as well as in the event you go a huge number of bus tours of the different parts of our vast country. The most correct way - metro "Prospect Mira". At the time of this writing, the lobby of the station with the ring branch was closed, so to pass I had to use the station "Prospect Mira" ring branches. The complex can be seen behind the local Applebee's (frankly, sports in General is difficult not to see because it's huge).

The entrance of the Olympic stadium:

Coming to the sports complex, on the left you can find the tent "the exchange of tickets to wristbands", where you will be able to exchange your ticket for a wristband.

After receiving the bracelet, You come into the main building of the sports complex, where you have to go through security screening: walk through a metal detector and show your bag. It is forbidden to bring any food, water, alcohol, sharp objects, means of self-defense and weapons (and other usually forbidden in such cases things).

The main entrances are branded with logos of the station, and the arrows indicate the path exactly where your place is or how to get to the Dance ground.

The atmosphere of the festival:

Many people are preparing for this event seriously - someone's wearing pioneer ties, someone takes a flag, someone dyes her hair or wears colourful wigs, and someone coming from the Republic of Belarus (seriously!), but all these people have one thing in common - they love the disco era, and this wave even between performances is very easy to meet and make friends with Your neighbors on the dance floor. The organizers made sure that the audience will actively dancing and having fun, and the dance floor was provided for a large number of free bottles of water which was enough for all.

- There are songs that we already do not control, rather, they control us. "Garbage wind" is one of those that went through time and space, independently of us. Therefore, before it is necessary to remove the hat, - said the leader and vocalist of the "Crematorium" Armen Grigoryan.

The festival was opened by this year's stunning timeless hits Samantha Fox Touch me and Nothing Gonna Stop me Now. She also sang the song Hot Stuff, famous all over the world Donna summer.

Roberto Zanetti (Zanetti Roberto), better known under the alias Savage, said on stage "Disco 80's" his birthday, which fell on November 28. So behind the scenes the whole night he accepted congratulations during a performance, the musician gave a poster with the inscription: "Happy Birthday, Roberto!" and a huge beautiful bouquet of roses.

A special reception awaited Vyacheslav Butusov and group "u-Piter", which, in addition to their hits "Chained" and "goodbye, Amerika", performed the song "a Star named the Sun" group "Cinema" (this year the whole country remembers Viktor Tsoi, who died 25 years ago). To the sounds of "the Star named the Sun" on the screens showed a photo and video documentary Chronicles the participation of Viktor Tsoi, and his face in the blazing solar Orb looked very impressive

- No wonder that the public embraced the song with enthusiasm. These songs are very relevant today, - said Vyacheslav Butusov.

Separately should be said about the special effects and light show. The amazing design of the stage and images selected individually for each song, completely immerse the audience into the world of your favorite music. That's the way they enthusiastically told Samantha Fox:

- Set design was incredible, perhaps the best that I saw at festivals of such level. My skin tingle and my heart nearly jumped out of his chest! Every year the effects get better and better.

But, perhaps, the most vivid impressions from the "newcomers" festival - group "Technology":

This event is unique and it has no analogues! Affects the technical side of what is happening - this creeping smoke, light, scenery... It's not even something to compare and contrast unique installation. It is felt that those who did do it, and doing very well.

- Many of the technological components of success of "Disco 80s" do the best in any point in the room comfortable. Experts think over everything, to avoid blind spots - revealed the secret of the festival's technical Director Michael Kapnick. - This year's set design volume. This effect is achieved due to the screens not in the plane, and at different levels across the stage, alternating the lighting devices. Themselves screens of a new generation with even higher resolution, the area and the best color reproduction. All of them - the last word industry show technology.

A surprise for the audience was the performance of Mikhail Boyarsky. The song "Zelenoglazoe taksi" in the list was marked with the word "Duo", but no one knew who will sing the main musketeer of the country. Partner on the stage with Mikhail Sergeyevich was the winner of the campaign "the best day" of March, Kibkalo from Blagoveshchensk - it was one of the most romantic numbers of "Disco 80s". The event was held in the eve of the festival and was timed to the premiere of the Comedy with the participation of Mikhail Boyarsky, which, by the way, at the end of December will be released with the support of "Autoradio". March, in addition to the enthusiasm of the audience and five minutes glory on the stage of "Disco 80s", also received for his victory certificate for a million rubles!

Another pleasant surprise was the song Japanese Girls band Joy, in which the second verse was dedicated to Russian Girls, and on stage came a beautiful girl dressed in fur coat and headdress.

In addition to the light effects a picture of each presentation complemented the dance numbers. Choreography teams was at an altitude of talented dancers and colorful costumes did not leave the audience indifferent - it it impossible to look away.

The final chord of the Discos was the appearance on stage of Chris de Burgh. Famous Irish sang four songs, concluding his speech with the song Lady in Red.

About the end of the festival the audience was announced by the salute of sparkly confetti from the scene. We did not see any disappointed faces, all the spectators dispersed in an excellent mood, and we look forward to the next festival, because it will be the anniversary of 15-m, and, therefore, it will be a even more spectacular show and a greater number of world renown on the stage of "the Disco 80-x Autoradio".