22 APR Warrior Soul, made in the German city of Weinheim 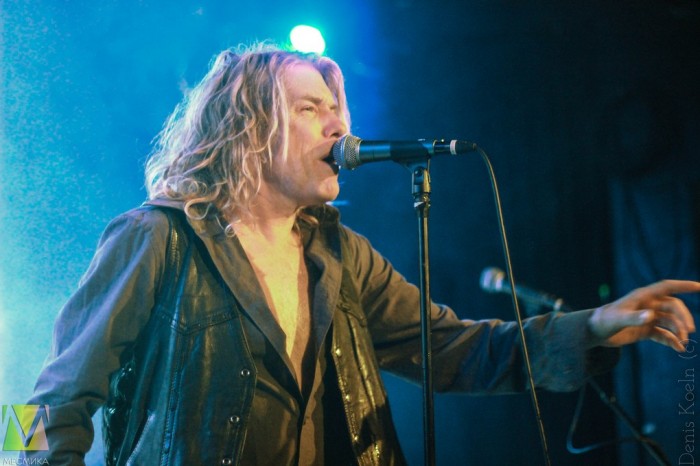 The German town of Weinheim, with a population of 45,000 people does a particularly unremarkable except that it is near large cities like Mannheim and Heidelberg, there is a fortress (as in any German town) and there is a small club called Cafe Central. Despite its small size, the club is quite famous in rock circles and is almost always rented for concerts. The club has its own paid Parking with enough places.

Because on this day the temperature outside reached 30 degrees, then nemnogochislennye people took the time to go inside, and drank beer at the entrance. But those who decided to go were able to do it without any problems for two reasons: there was no queue and there were no guards. At the entrance there was only the girl with red hair and sold tickets.

The club is located on the second floor and can accommodate up to 150 people. And if it is filled to half, then there may be very cozy, but if more, it would be an inconvenience because there is one very big minus - no air conditioning, and for some reason can not open the Windows. Maybe this has advantages for the owners of the club, as the audience from moving away from the bar... which there is quite extensive and offers a few Beers.

Tonight Cafe Central was visited by none other than Kory Clarke with his team of Warrior Soul. In a small tour for the new album "Back On The Lash", the group toured Europe and as in the words of the musicians themselves, it is not the most visited of their tour, this concert can be considered one of the most successful, because it's about 110 people and the room was well filled.

The opening act for this evening were two young team The Roxy Flames from Germany and Acid Muffin from England. The Germans played pretty well his set before almost empty hall, as the audience for the above mentioned reasons were saved from suffocation on the street. Very sorry, the hard rock in the style of Guns n Roses would lot like. Acid Muffin was less interesting, rock-n-roll in the style of Motorhead... perhaps not his best representatives. The trio didn't sound very interesting, and quite equally unprincipled. But there were certainly those who had their performance like.

About 22.00 small hall is already clogged almost completely. The musicians appeared on stage and sounded the first notes of the Intro to "American Idol". A few moments later came out and the main culprit of this celebration - Cory Clark. After the Intro, was presented more songs from the new album "Back On The Lash". New material in live version sounds very vibrant and energetic and despite initial sound problems that were quickly resolved, the audience is more and more acquired a taste for it.

Next, Corey and the team invited everyone to join them on a journey through time, but rather through the entire musical history of Warrior Soul! Almost in reverse chronological order, album after album, went some hits are all familiar. Incredible "Bad News (Rock n Roll Boyfriend)" just blew up the hall and upped a few times! Fans had a ball, began to sing along, dance and shake your hair! This could be two reasons - either the people overheated from the stuffy air in the hall, or all so happy to hear your favorite songs. Most likely it was the second option with a little pinch first. Unfortunately, there were those who really overheated. So in the middle of the audience appeared barefoot character, in shorts, sunglasses and a beer. All would be nothing if he didn't touch anybody, but he decided to go the other way and began to pour people beer, to push and provoke. Despite the fact that metal people are pretty tolerant people, it could not continue, soon a scuffle ensued. The troublemakers squeezed the sides and the face and removed from the hall. It should be noted that this action took place right in front of the stage and the song "Ass-kickin" (interesting coincidence!!! - Ed.) but the musicians have not stopped playing. But even if it is visually approached the music would be better if such incidents do not occur. It must be noted that the voice of Corey over the past year, much has changed, but when the sound hits such as "Love Destruction", "The Wasteland" or the killer "Punk and Belligerent", they never notice and even "husky vocals" gives a fresh sound to the songs.

From the stage flowed the incredible energy that the audience was absorbed and with a double return return the group! And if in the beginning, someone who could not stand the heat and moved away then closer to the end of this one and thought! The room literally was filled with energy and rock-n-roll! In the end, Mr. Clark decided to surprise their loyal fans and it sounded the first chords of "The Losers"! Big hit of the group, who in the early 90s a very long time left the rotation of MTV for many years has not played at concerts. After played "Jump For Joy" no less pleased the audience, as this is another brilliant group. The "Rotten Soul", after which the group thanked the hall and left the stage.

This evening Cory was not very talkative on stage, but the musicians did not hide their pleasure, and words were not necessary, as the music spoke for itself. After the performance Corey went to the gym and for a long time talked with fans, signed CDs and фотографировfлся. Of course,Warrior Soul deserves to return to the big stage and tonight was another confirmation of the fact!

Read the interview at the link.