Group FACTOREAL - the voice of protest of the new generation? 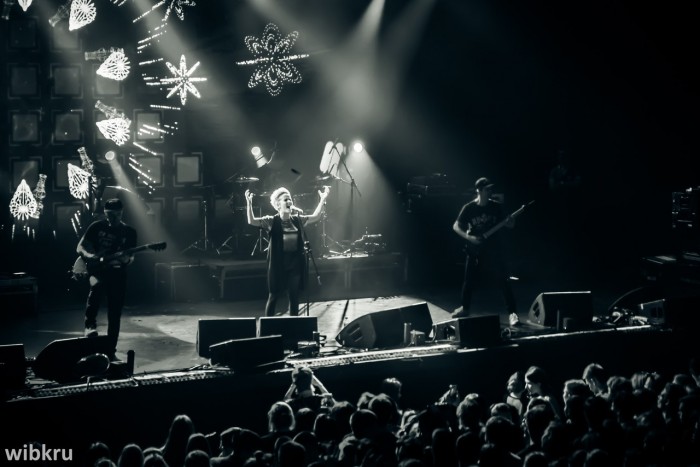 FACTOREAL group, known to everyone interested in the music of protest. Bright, energetic, burning on the stage and shouting the truth as they see it, the musicians played along with their more seasoned colleagues, warmed up, for example, Lumen and Louna. And the big festivals are not spared, having to play at home in the Russian reality - the "Invasion".

11 may FACTOREAL presented his new album "Supergeroy" in St. Petersburg at the club Opera Concert Hall. Have supported them in this friends, colleagues, rivals for the festival Revolution, Wartomo group, led by vocalist Alena, Vartolo.

The performance was divided into two parts, and though the event was announced as a solo concert FACTOREAL, but powerful, deep vocals of Alena gathered to listen to a lot of people. Given that the main protagonists of the evening, the people just exploded, we can say that Wartomo become a sort of sigh before diving into the depth of the energy vocalist FACTOREAL Angelica and her team.

But when they came on the scene, and it happened about nine o'clock, present in the room flashed like a bright, young, honest, ready to completely give yourself and support your favorite musicians. However, the participants FACTOREAL so sincerely reached out to their audiences, so they are warmly thanked, approached, shook hands and smiled, it became clear that these guys are completely separate themselves from fans.

In the setlist FACTOREAL seamlessly mixed old and new songs, about the presentation of the album remembered, he was posted to the network for another third of may, and therefore sang the songs learned already very active. In addition, lyrics and endless drive side by side in the track list so that you can rest before the next explosion slam.

There are in the new album are very delicate compositions, for example, "Doomed to happiness." This does not mean that it is not usual engelking turbulent energy flow, but the meaning is very touching and lyrical message.

Now less used flares in the clubs, but here, the fans at your own risk organized a beautiful fire show by "Angels", but it wasn't just the fire, and lit the girl with angel wings sitting on the shoulders of one of the spectators. In recognition of the singer at that moment she almost burst into tears.

It was not the only fleshmob - the hall flying paper airplanes and huge balloons under one of the songs for some time the audience was forced to sit down, and under the other blew confetti. Overall, a spectacular concert was no less saturated than emotionally.

Saying goodbye to the audience, the musicians for a while left the scene. Ago they called for such an ovation, that does not play an encore would have been a crime. FACTOREAL and played, finishing the song, without which it can not do a concert of this group - "calm down".

What can be said in General about the concert FACTOREAL? Often young bands where revelation and brighter than those with age and experience away from social issues. They have something to say and they're not afraid to shout about what really excites and what I want to say. Have FACTOREAL can be a great future like they need now, when sincerity and honesty is becoming less. Well, more modern sounding than many experienced musicians only adds to their points as representatives of the music of the new generation.