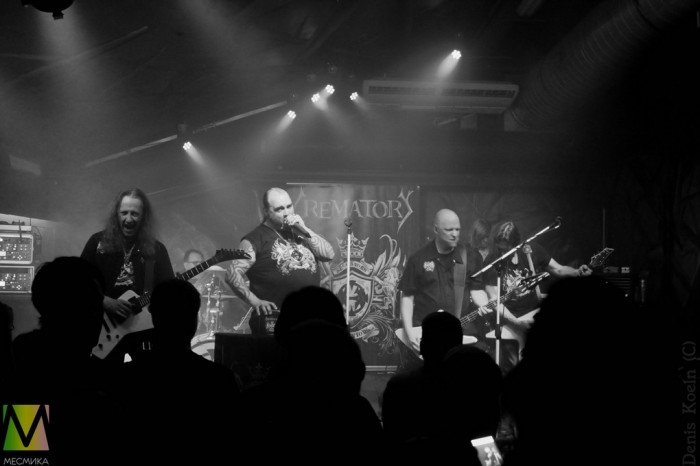 29 April, as part of his tour of Germany for the new album kings German Gothic metal Crematory made in the legendary Rockfabrik in Ludwigsburg. Club Rockfabrik legendary all! In the first place because it is one of the oldest rock clubs in Germany! In 1983 he opened the doors of "the Rock factory" and to this day the club pleases its visitors with concerts and discos. Over the last 35 years in the Rockfabrik was visited by musicians of such bands as Metallica and Iron Maiden, and the scene trampled commands like Helloween, Lacrimosa, Volbeat, Arch Enemy and many others. And in the distant ' 90s have left their mark even the Russian hard rock, Gorky Park legend! Rockfabrik has long become a landmark and every rock tourist, visited these parts, just have to go there!

In the 2000s the club started to expand and there were two more floors. On one of these floors did another small room with a capacity of 100 people. Since then there are concerts which are "not reach" up to the main hall.

Since Crematory was originally problems with the presale for this tour, and the musicians even threatened to cancel it, it was decided to postpone the concert in the small hall.

Exactly at 19.00 the doors opened and we started to run people. The entrance to the "club 2" is on the other side of the building and you can get there through the Parking lot on the second floor. A few people quickly came to the hall because there was no control at the entrance. Because Rockfabrik in addition to concerts every weekend is a rock disco bar is very rich drinks, there is everything from water to cocktails. Also Crematory brought enough merchandise was everything from women's leggings to discs and vinyls.

Exactly at 20.00 on the stage, Wilde Jungs. Perhaps not the best choice of the group to warm up. But, according to the chief Crematory Marcus Ullica, such a choice is made in order to acquire new fans and old to introduce new music. Play Wilde Jungs German rock with elements of punk and sing about the harsh life of "real men". The public is also not quite understand how to respond to this kind of music is still Gothic metal and German punk rock not quite birds of a feather. But there was some skinhead guys (by the way, the musicians look the same), which is nearly one hour speech had in mind.

The reconstruction of the scene went pretty quickly and smoothly 21.30 the Intro started playing. Already well-filled hall greeted the musicians with loud applause, and the group in turn greeted the audience with a new single "Salvation"! The fact that the new album reached the 36th place in the German charts noticeable was how the audience knew and sang new songs! Initially a small problem with sound was quickly resolved and the guys played a great mix of old and new songs. The fact that the Crematory is a great story it was seen by the public, the concert was attended by both adults and very young fans. The Germans went through all periods of his career and such hits as "The Fallen", "Greed" or "Tick Tack" was received with full enthusiasm and joy. Singer Felix and new guitarist/vocalist tosse was tonight in his voice and in a great mood, but like the entire group! Superbly executed "Everything" was another proof of how the musicians! It should be noted embarrassing moment in public. By the middle of the concert in the first rows were already above referred to shaven-headed children in a quite drunk state. A mix of their condition and behavior is very strongly pointed to the fact that young people with every song "turn into" animals with dimes. So they tried to organize the likeness of slam with people twice as old as them, sprayed beer and always looking for contact with people. And any comments answered aggressive remarks and gestures. Of course such behavior from the stage is most visible and Felix had several times to handle the situation, because it was close to the conflict. Disadvantage of small clubs is that they are generally not protection resolving such situations. Despite this slight negative, the concert continued. Definitely Crematory released a very good album and each song was perceived by the audience with full enthusiasm. And "Revenge is Mine" and "Ghost of the Past" or perfectly executed solo tosse "Stay with Me". All of these songs will become an integral part of the set sheets of the group!

A nearly two-hour speech, the Germans finished the new "Wrong Side" and of course traditionally the beloved "Tears of Time"! Of course this song is a trademark for the band and the audience once again exploded with delight and joy when I heard your favourite hit! Finally, the group thanked fans and those held from the musicians with a long applause!

Crematory once again proved that they are the flagship of the German Gothic metal and how the band is good live! With Luggage the album "Oblivion" the group should be no doubt whether to proceed round!