The baptism of Yaroslavl Bread, or beach party with the exemplary slam 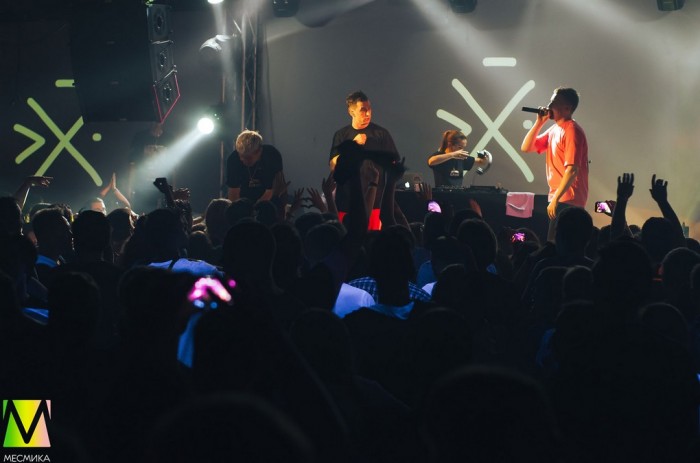 If the BREAD Cannon, the show Bread in Yaroslavl – cannon shot blew up the dance floor in club "the Hill" on may 19. Yaroslavl does not often indulge in interactive, entertaining concerts, but tonight made up for all the gaps. It was a little more than just "cool." 1.5 hours Denis, Sasha and Kiril had arranged a beach party, made rap the baptism of Yaroslavl, fed fans and has organized speed-Dating. But about all under the order.

New album "Cannon" went beyond humorous and "bizarre" rap, new songs make fun of and parody are completely different musical direction. A new milestone in the development of the band became "Pay for tech", for example, "Squirrel". Guys come to Yaroslavl for the second year in a row, and the last concert was notable for the quality of the show and the diversity of the musical content, while it was hot brand at every meeting with Bread.

It was hot even before the release of the group. The people gathered, music played, and XLEBFAM was already preheated to the average temperature of the middle of any other concert. From the new album, the boys sang: "Cry on techno", "Mohair", "Squirrel", "the girl from the concert Little Big", "I Want hair like Pharaoh" and others. The children also pleased with the performance of the songs "Abe", "Little half" and become a classic, "Tea, sugar".

Beach party, as expected, began with "stuffing" (in the lightest sense of the word) tubes and balls. With each song the degree increased. "A great welcome! Here is a man stripped!" - said Denis and sprinkled the hall the first 0.5 liters of water. After this the boys without t-shirts became much more. Before the song "Drum & Bass" guys handed out bottles of water, asked the girls to not climb the neck of young people or last hit not to be shy and to take the girls on hand. To interact, everything from close friends/lovers to complete strangers, but to bystanders. The words "Mom, I love you, just do not change!" the children again raised their hands with bottles up the fountain and splashed around the available radius. Water was more than in the river during the baptism of Rus', dry left one, and the humidity contributed to the further emancipation and convergence on the dance floor.

What's a beach party without a buffet. During the song "Cameroon" guys brought to the stage a banana and fed it to the most squeamish and standing near the stage guys. "The moment when we had XLEBFAM, was as beautiful as "Sex!!"!" - thanked Denis overwhelming majority of slam. XLEBFAM should be considered as part of the whole show. The guys made a powerful slam organized, stocked up on sparklers and caused endless smiles, thanks to the inscriptions on their t-shirts, consisting of the lyrics.
Goodbye guys said, "This is the best party this month, definitely! Yaroslavl – you gun!".