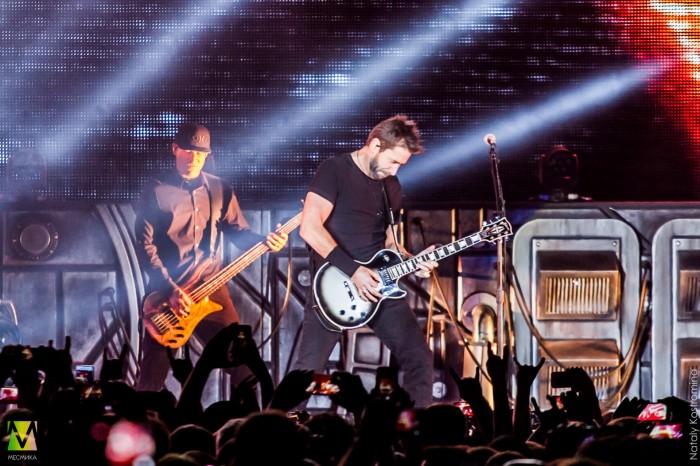 After six years in the Russian capital has granted the group that is the most contradictory feelings in listeners all over the world. On the one hand, this unrestrained delight of fans and albums sold millions of copies. On the other hand, harsh criticism and rejection from musicians, producers and journalists.

The Moscow concert was no exception and he divided the audience into two parts: someone saw a magical show, others cats. The group "Nickelback" made in SC "Olympic" on Monday, may 21, with the support of the concert Agency "Mill".

According to the official history of the group, it was organized in the canadian town of Hanna brothers Krugeri, the eldest of whom, Mike, working in a café, often pronounced the words: "Here's your nickel back" ("Here is your 5 cents back"). Nickel - a slang name for the us five-cent coins. "Penny" is the name of the group liked Krugers most.

Gradually increased the popularity of the teams mainly in Canada. After 6 years of its existence, the guys caught up with success after the release of the third album "Silver Side Up", with the main hit "How You Remind Me" about the misguided and fallen from the unrequited love of an alcoholic philosopher. Then followed the slaughter of all of the albums every 2-3 years, the soundtrack to the cult film "spider-Man". And in 2000 years "Nickelback" was the best selling group in the United States after The Beatles! For comparison, try to imagine a group from somewhere in Chita or Khabarovsk called "Piglet on the change", which after 6-7 years becomes famous. These guys were able.

With such a track record, even with a brand new album "Feed the Machine" overseas musicians came on the scene "Olympic".

If you are not a longtime fan of "Nickelback" and you have no vital importance to occupy the first rows near the stage or certainly to hear the band "warm up", you could easily come to the 20.00 and it is absolutely free to go to the gym without any queues. Police officers were not more than enough to maintain order.

Inside, the hall was almost full. The audience already listen to the band "the Train" from Slovenia, which supports Canadians in the tour, and to celebrate a great sound during a set. 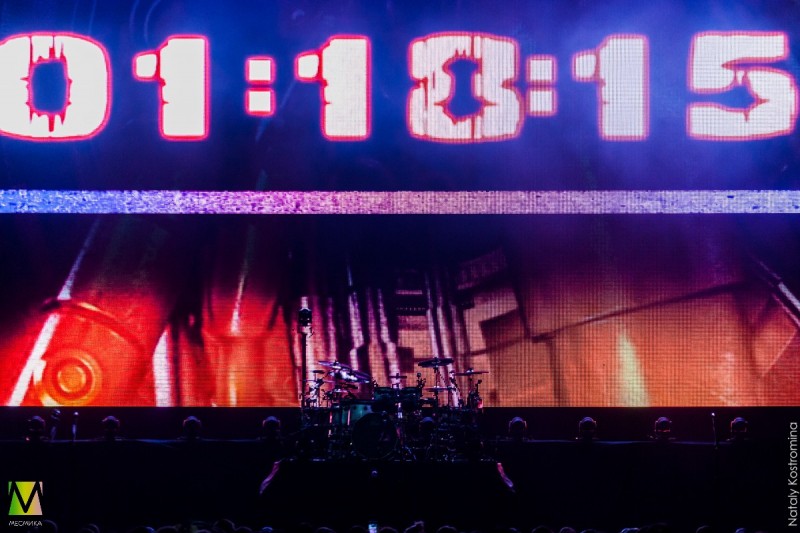 although, after the last second of the performance has not begun.

When he heard the first chords it became clear that the group brought a spectacular show! The most attentive audience, before coming to the meeting could see a number of trucks. 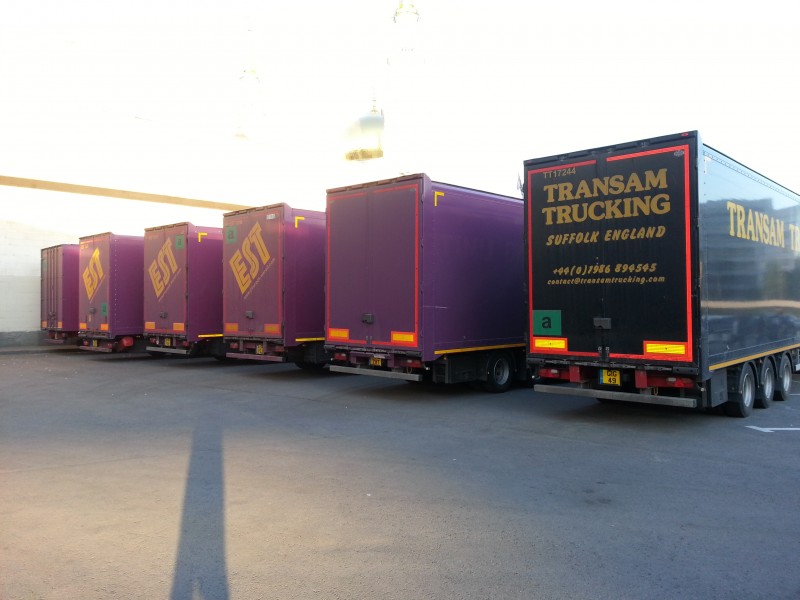 It is possible that they had brought a huge amount of equipment. The stage was decorated in techno style with ultra-red illumination, on the Playground, a semicircle was full of strobe lights in multiple rows. 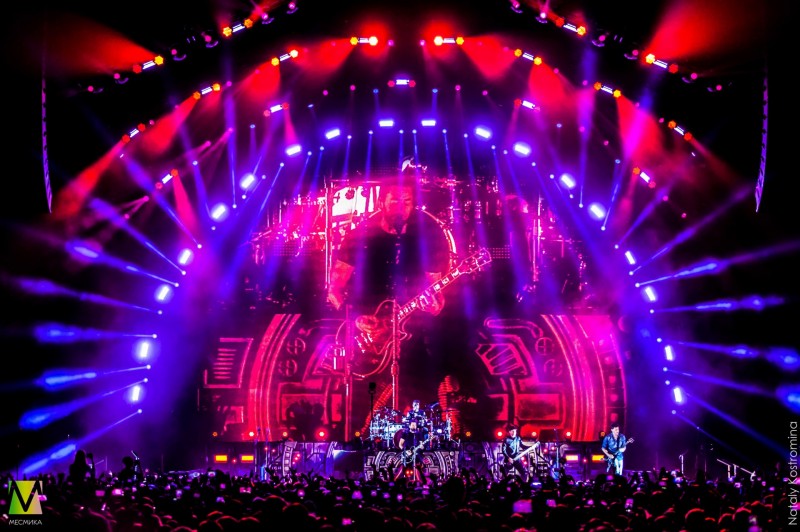 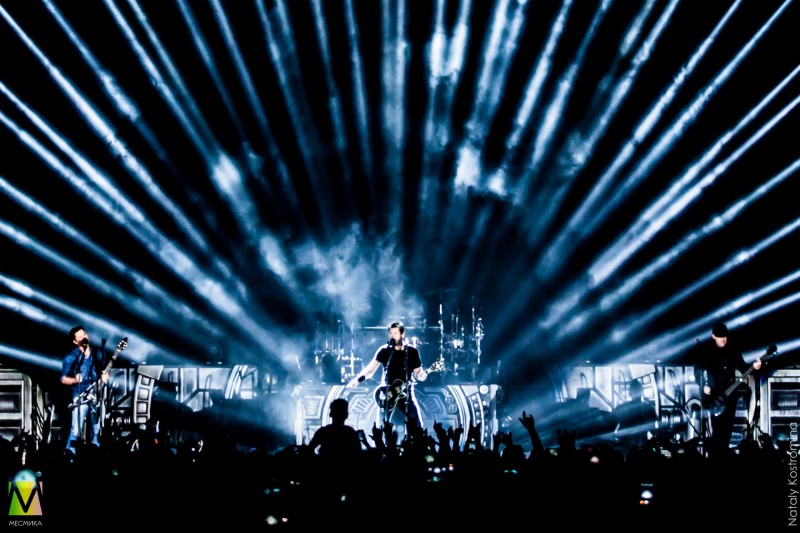 To match the design of the stage was the first song: the title track from their latest album "Feed the Machine". A variety of special effects, smoke and a huge screen in the background helped to create a fantastic spectacle! 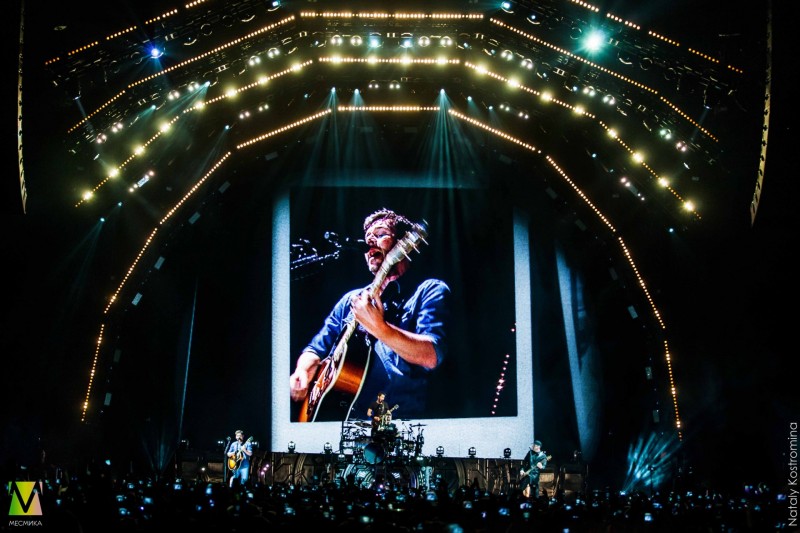 But the engineers extra time to prepare, unfortunately, did not help. With the first songs the audience was unpleasantly surprised by the mediocre sound quality: the bass and drums are almost completely drowned out the vocals. Maybe the reason for that was a couple of local "Olympic" cats? They were seen when running from remote sound engineering under the bleachers.

The court, contrary to custom, was low and at the same time, multilevel. 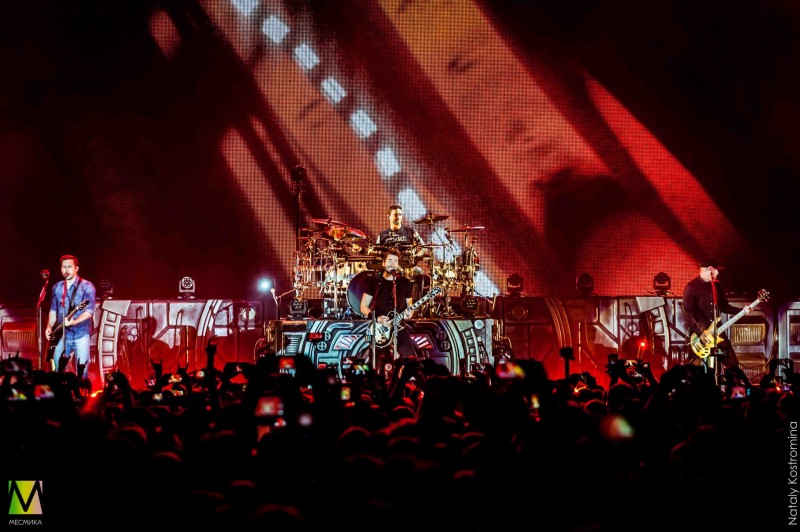 The first rows of the audience could feel the special closeness of the musicians. But the back had more complicated: if you do not have above-average growth, to see what is happening on stage - a real problem. It exacerbates a bad and silly habit of the audience to shoot everything on their mobile phones at arm's length! What is your impression of the concert can leave dark blurry photos and terrible shaky video with horrible sound? It is difficult to say why this is necessary, if you see - live artists, and after a concert always have high-quality photos from professional photographers.

Photographers, by the way, has allocated a workplace right for directing control, 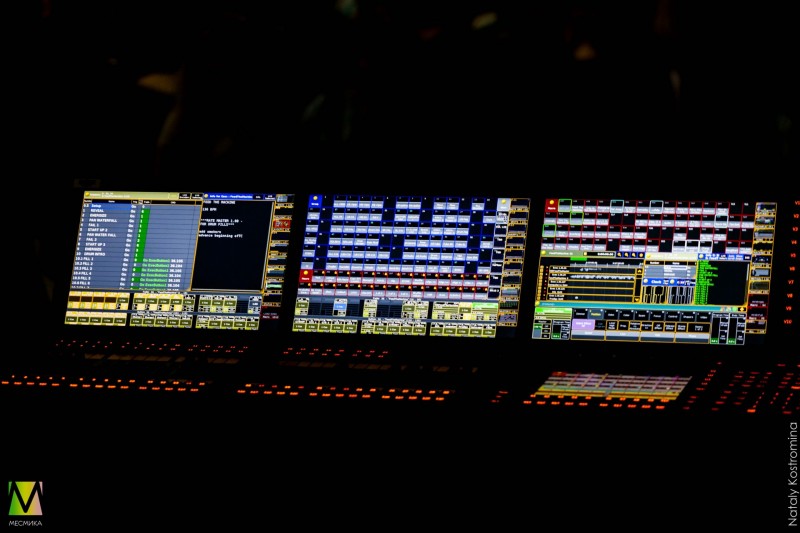 but after the third song, "Photograph", they, unfortunately, asked to leave.

Musicians freely and impressively moved through the scene talked a lot with the audience and joked and even something to drink out of opaque cups . It might seem that lacks some liveliness to the speech. However, in moments of communication with the audience created a warm atmosphere.

Lyric song "Far Away" was performed for "russian ladies". Which is not surprising: the language of marketing, almost all of the songs aimed at this target audience. 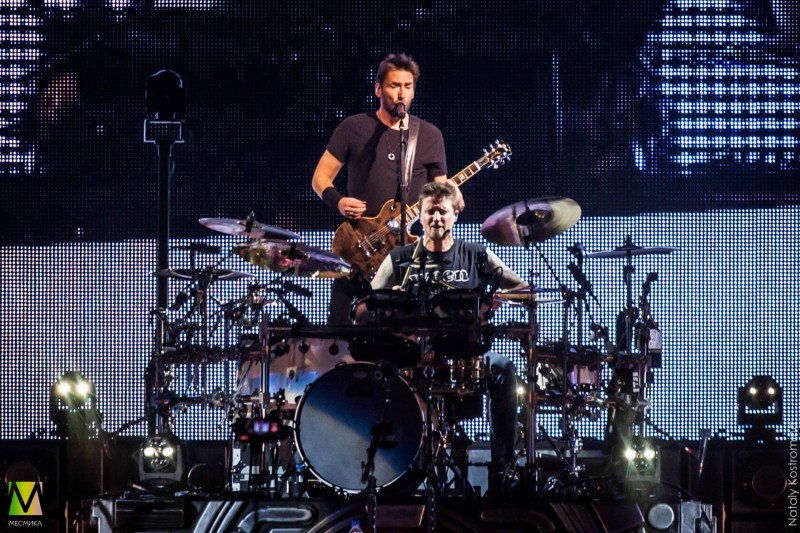 After about the fifth song Directors "tweak" the sound became clearly heard what mercilessly criticized "Nickelback". If the listener has a bit of a musical ear and a little bit of musical taste, that he soon begins to notice that songs by the group suspiciously similar to each other, despite what is written in different years. Third-party listener can sometimes seem like the same song the musicians play slightly faster, in a different arrangement and with different words. However, the real fans, of course, prefer these strange not to notice.

"Off-plan" sounded the famous song "Hero", which formed the basis of the soundtrack to the famous film "spider-Man". At least initially, the play list of the show she did not appear.

The concert went on as usual: energetic boevichkov was followed by lyrical ballads. Guitarist Ryan Peak managed to play the electric guitar, and on acoustic and keys to sit: 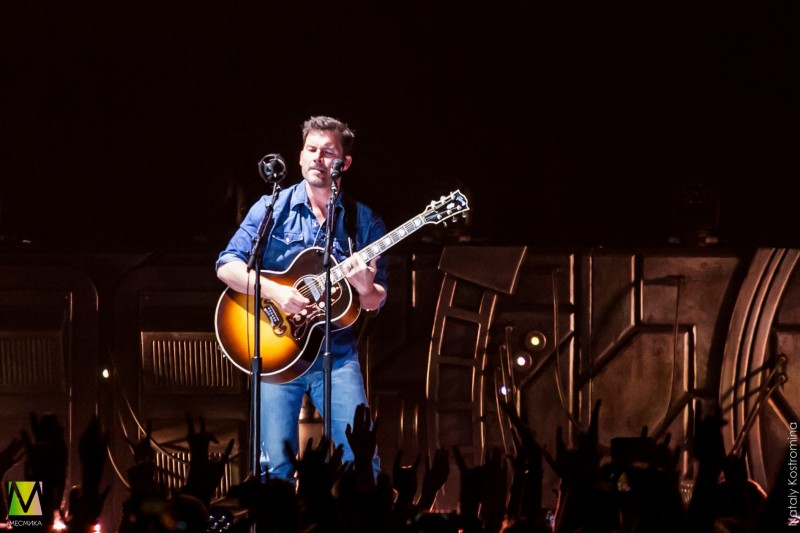 However, the most interesting was ahead. The song "Rockstar" came out to perform two more "rock stars". On the stage stood two fans who were winners of radio MAXIMUM. Of course, new singers and excitement of the species thousands of the hall frustrated voice and confused words, but this is, without doubt, was their finest hour! After all, to be photographed on the stage of "Olympic" with their idols is just amazing! Not surprisingly, after such a hit "When We Stand Together" along with the performers have sung the whole room.

And then something happened that rarely see at concerts. On the stage stood another winner from radio MAXIMUM. He was immediately hung by the instrument and gave up one of the guitars of Chad Kruger. Then sounded a wild song "Animals". And this guy played along with other musicians! Moreover, at the stage immediately felt the movement: new guitarist "Nickelback" managed to run across the stage to scatter the fans mediators, to jump to the second floor - and all this for some three minutes.

As it turned out, the name of this hero - Wladyslaw and he's only 21, 13 of which he holds a guitar in his hands. And his appearance on the stage - not the billet of the Director, but the story of perseverance in achieving your dreams! That's what he said after the speech:

"I'm a guitarist playing for 13 years. "Nickelback" - my favorite band listen to them since 2003 and I wanted to go to their concert. In 2012, I did not let parents in another city because of age, in 2015 the concert was canceled, and only now succeeded. On Saturday specially went to the airport to meet the group. This day was chosen simply out of logic, and just felt - I don't know how to explain that the group needs to arrive on this day. It gave the guitar to the signature, passing about 10 minutes spoke with Chad and told him about how I love the band and how old were waiting for their arrival. In the end he asked if he could realize my dream to play on stage with them? Because the guitar at hand, Chad asked me to play right there. I played all right and he said we will try to do it at the concert. There I told him that I would hold the appropriate label.

At the concert I came very early, standing from 7 a.m. to take their first series, the poster was with him. I kept it the whole show without dropping, his hands were numb, but it was worth it! Chad recognized me at the very beginning, and nodded. Took a second t-shirt as a sort of interview Chad said that could be definitely in the black while I was running to the scene, changed. What was further - you all know. The only inconvenience is headphones constantly play the game and I stopped myself to hear, I had to stop and correct, not to be mistaken. Without the small mistakes do not cost all the same, affected the excitement of a favorite band on the same stage and 20 thousand people that were looking at me."

After an unplanned execution of the next metal-Thriller "Side Of A Bull" and the famous "How You Remind Me" which was sung by the whole audience, the band threw guitar picks to fans and left the stage.

Needless to say that a crowd of thousands of excited fans not only dispersed, but also caused the idols for an encore? Of course, such a scenario was provided in advance, but it only warmed up interest of public. 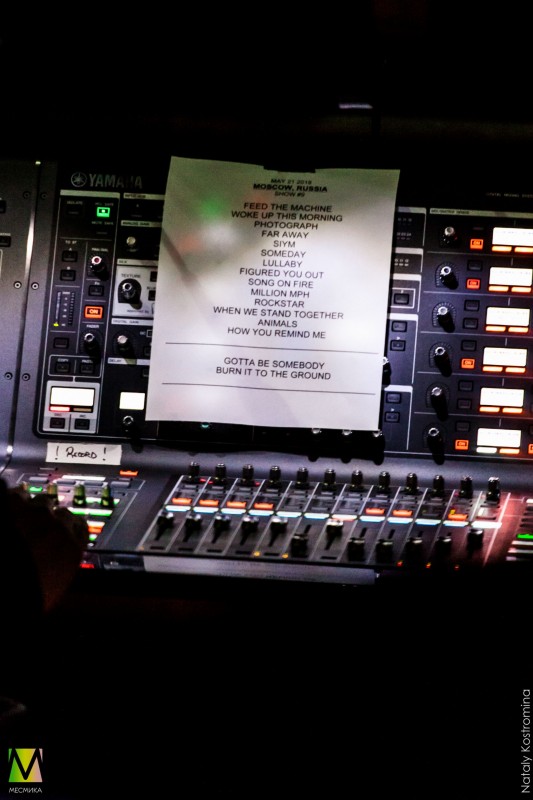 Ended the presentation with another badass song on the alcohol theme: "Burn It To The Ground". How it fitted as musicians, and they all drank from their cups, we can only guess. Going to the gym drumsticks put an end to this show.

Summing up the concert, it can be noted that each saw and heard something coming. For most it was a complete delight to drive, great mood. And these impressions are completely blocked and overlays with audio, and simple motifs of songs. After all, these guys are from the remote canadian province thanks to his tenacity realized the dream! Let this be an example for every fan of "Nickelback".