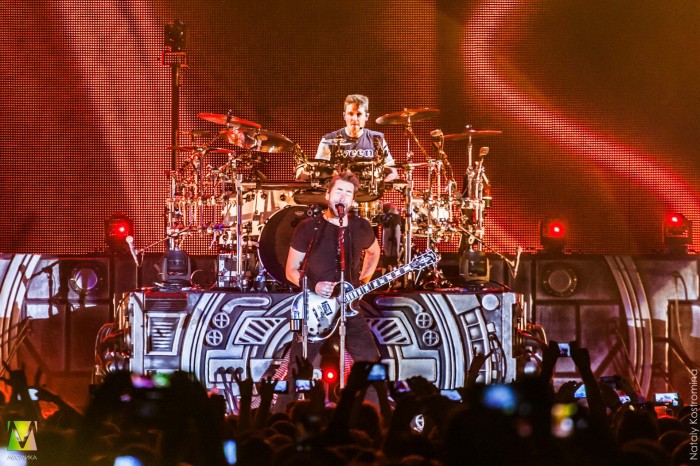 It would seem that the Canadians in the ice Palace in St. Petersburg can call from ordinary people, only one, already merged with the blood of the Association - hockey! But no, the enlightened public of the cultural capital knows that Canadians Nickelback is heat, fire, and colorful show. All this they brought in St. Petersburg on may 23.

The musicians went on tour in Russia a few days back already appreciated by the Russian public in Moscow and even to learn something in our language. Vocalist Chad Kroeger repeatedly demonstrated newfound skills, addressing the audience.

Start the organizers began to advance, another at 17.45, the beginning at 19.00, but the precaution was not superfluous - at the entrance gathered a lot of people, though the majority came to the very beginning. Ice Palace copes with the organization of input / output, security sent the right people to the right doors.

Interesting surprise, and even enjoyable, was the ability to transfer to a more convenient place. The top podium remained free, so the audience was given the opportunity to watch the performance with the sector closer to the stage.

It all started, as expected, with a warm-up. As of dispersal by the group "StayTrain". These Slovenian musicians support Nickelback in the Russian round and coped with the task of preparing the audience for the main show.

The main part started with the light show. Lit up lights, and by all the noise of the fan votes came on the scene musicians: vocalist Chet Krieger, guitarist Ryan Peak, bassist Mike Kruger, and drummer Daniel Adair.

Just want to note that Chet and Mike are very friendly to their audience. They spoke with them, so actively joked that it seemed maximally relaxed, like they are now not in front of an audience of several thousand people, and gathered for a small appartment or friendly gatherings at a nearby bar.

They even introduced me to his assistant, who was regularly given them to drink, when the musicians began to disappear the voice.

Interesting moments were many, for example, on one of the songs Chet Kruger sat at the piano, temporarily putting aside the guitar, more usual for the instrument and performed a very beautiful and romantic ballad.

The song Rockstar fabulous happened for the majority of ordinary visitors of the concert story. Two students, a guy and a girl is brought on stage and given the opportunity to sing along with Nickelback. On their faces was written an absolute delight, and a young man very sincerely told the musicians about their emotions.

And yet, despite the warm reception by the Russian audience, not to draw attention to the fact that Nickelback do not get the recoil energy. They clearly do not accidentally become international stars, and without energy exchange with the audience, this would not be achieved, but some guests shared their impressions that the concert lacked the drive.

The second time, to spoil the impression of the concert was the sound. In the ice Palace perfect it happens very rarely, but even then, in a meeting Vkontakte actively discussed the lack of elaboration is sound.

But even though it is important, and stuff. Nickelback played a beautiful show, trying to do everything to satisfied fans and audience. I want to believe that to come they will more often than every six years and every time to bring all the best shows and increasingly successful albums.