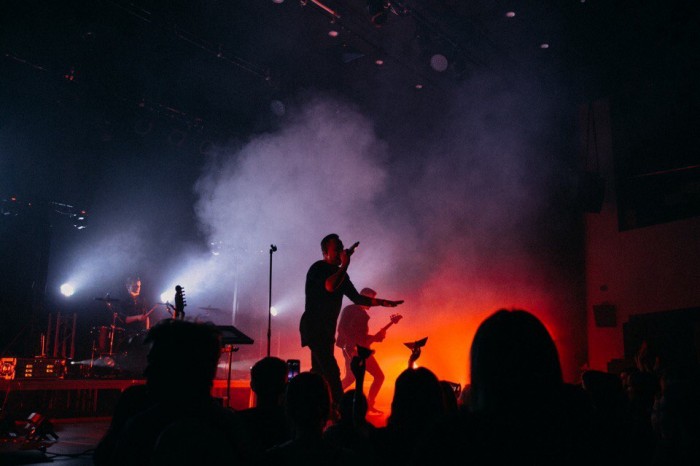 When connecting traditional rock and modern electronic sound, when the energy and youthfulness of the musicians mixed with professionalism and competent approach to the organization of speeches, then comes the concert, which is remembered in the audience's memory. Kostroma group OceanJet arrived in St. Petersburg on may 25 in order to prove the Russian capital of rock they will show you where developing this music.

It's the performance guys passed on not long ago opened the site, the club Upiter. It recently celebrated the first working year, and during that time Upiter took more than a dozen artists. There is a club in the same room with Akakao, in the heart of the city, where no less than the legendary MOD. In General, problems with navigation and finding the right places should arise.

Separately want to mention that Upiter itself is very cosy and atmospheric club. Inside a lot of tables with candles, pianos, trunks, brick walls, decorated with various artifacts - here you just want to be in.

Ocean Jet came with a noticeable delay, by nine o'clock, although in the beginning it was stated at eight. This is a common practice, soon the audience will cease to receive the promise of the beginning of the concert. But when the vocalist, guitarist and drummer appeared on stage, and behind them turned harvested visuals, they heated a long wait, exploded with screams of delight.

Not to say that musicians actively communicated with the audience, but when they started to play like the waves covered their endless energy. Songs sound units and pauses appeared just when the audience already risked to collapse from the strain of emotions that gave Ocean Jet.

Screen with selected visuals complement the imagery and energy of the songs. It's live, sometimes delayed and hypnotic, even more immersed in the world of musicians.

Interestingly, it seems there was no set list as such. During the break, vocalist, Ocean Jet, Maxim, flipping through his tablet, deciding what to play next. The better you can guess his mood, based on a selection of tracks. Part of the show was the light. A frontman regulate lighting and requested the Director to enable and disable the searchlights.

Not without its technical difficulties. When there was a problem with the sound, the musicians treated it with humor: "otherwise could not." "Peter" called them from the hall. "It's not Peter, Ocean Jet," replied Maxim.

Giving your drive the audience, musicians and received in response to the maximum that they could give their fans. At the end of Ocean Jet admitted that "It was the hottest admission in St. Petersburg" and promised to come back.