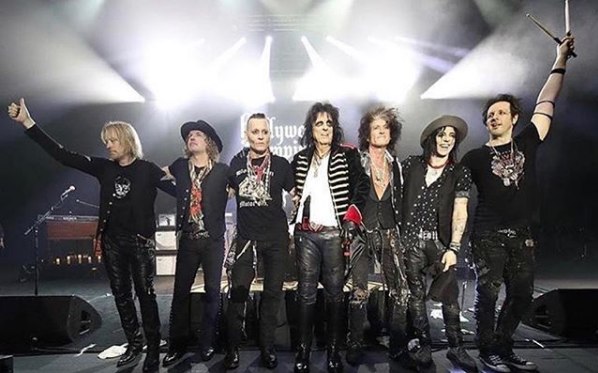 In the mass consciousness when the word "cover band" POPs the image of an unknown band that plays somewhere in pubs other people's songs, and, of course, worse than the original.

Tens of thousands of spectators gathered at the Olympic stadium to see the supergroup transatlantic.

Witness how connected all these events that you drink are real vampires, and what does johnny Depp became MESIKA.

The story began nearly half a century ago for many thousands of kilometers from Moscow. Barely survived the "British invasion" of America was covered by a new "attack": the nascent hard rock and progressive. Darkness coming over freehold land... At this time in the "movie" the American city in the top bar “Rainbow Bar&Grill” on the Sunset Strip often got tired of the battles by the warriors of darkness and light. Their eyes faded from a powerful spotlight, their ears were thunder amps and the squeals of fans who wanted their flesh! And they drank the bitter medicine, sometimes sweet and semi-sweet, to rest and forget. And then one day he gathered them around himself the king of shock rock Alice Cooper (Alice Cooper), chicken killer, and the horror of uptight moms, the sight of which inspires awe. And they founded the brotherhood of "Hollywood Vampires".

It has been many winters, many famous warriors died in the fight with a green serpent and the visual dope... But the king survived and decided to resurrect the vampire club. And joined him, johnny Depp (Johnny Depp), who played in the movie crazy maniac and unscrupulous pirate, and Joe Perry (Joe Perry) - "bad boy from Boston". And they began to sing their old friends but to compose his own. And they went around the world. And the night before the full moon with the concert Agency SAV Entertainment has reached Russia...

Astronomers will not lie: the real full moon happened on may 29. "Vampires" at this time, as the time went on stage in St. Petersburg.

"Hollywood Vampires" really unique project. In the history of rock music there are many examples of musicians already well known in other groups or as solo performers, created a supergroup. This is the supergroup "the Hollywood Vampires". However, all of the supergroup perform their songs. And only sometimes - the songs from other bands that previously played members of the supergroup, and who are the authors of these songs. Here again, an obvious departure from tradition: "vampires" performed mainly songs of famous rock groups, and only secondarily his. In other words, we have the typical cover band.

With the popularity and success of this team, too, not all typical. The group met for the first time in 2015. And already in this first album and first concerts attended by the real legends of rock: Dave Grohl ("Nirvana", "Foo Fighters"), Slash, Duff McKagan and Matt Sorum (all three "Guns N Roses"), Joe Walsh ("James Gang", "Barnstorm", "Eagles"), Paul McCartney, Lizzy Hale ("Halestorm"), Marilyn Manson, Perry Farrell (Jane's Addiction), Robby Krieger (The Doors), Zak Starkey (The Who, Oasis), Brian Johnson ("Geordie", "AC/DC"), Kip winger ("Winger"). From one list of names head can go round and round! They perform on the same stage with "System Of A Down" in Rio de Janeiro, and then on the presentation of the musical award "Grammy". Finally, in the second year of its existence the band goes on a world tour, part of which was the performance in Russia. And, presumably, the more difficult it was to coordinate schedules of team members: each of them has their own projects, and johnny Depp active in films.

Moreover, the project "Hollywood Vampires" is a non - profit. Stated that all of their income group donates to the Fund of support for musicians, MusiCares Foundation.

As recognized ideological inspirers of the team, Alice Cooper and johnny Depp, the main idea of the project is to revive the spirit of the old club "Hollywood Vampires" as a pleasant place for musicians, where you can have fun, laugh and together pagemill. Probably very few people then could have imagined that this friendly venture would grow more.

The secret of success is multifaceted. Their concerts are coming fans of Alice Cooper, Aerosmith and, of course, fans of johnny Depp, which, frankly, unusual to see a guitar on stage. Listen to those who are more at the heart of good old hard rock and progressive sample 70-ies of the last century - the "Golden classic" rock. Of course, plays a role in the trail of fame, which stretches for each of the participants.

All of this can be seen in the "Olympic", which on Monday came a few tens of thousands of people. The spectators saw a fantastic light show. On the stage instead of fancy sets and technical wonders was placed many amps. It is not surprising that from the first minute to the audience in the hall was struck by a powerful thick sound. It is worth noting that the sound quality was excellent!

At the site, except extravagantno Alice Cooper, there were as many as four guitarists: Joe Perry and johnny Depp helped guitarist Tommy Henriksen (Tommy Hendriksen) and bassist Chris wise (Chris Wyse). Richness of sound and drama added keyboardist Bruce Witkin (Bruce Witkin), with the clear drums the rhythms have been carved out of Matt Sorum (Matt Sorum).

This evening on the part of the acting, of course, the first was Alice Cooper! He started his speech in biker leather outfit. By the way, so Alice has successfully advertises the brand John Varvatos of his friend John Varvatos. Then had to sing a few songs in a white shirt, which was later replaced by red t-shirt with double-headed eagle and coat with a cocked hat. In addition to the microphone, he did not let go of the stick, with which he ruled, like a real magician. A bunch of roses, flown in from the hall, Alice threw back, and a wreath in the shape of a heart was placed on his head.

During the concert, Alice managed to visit all corners of the stage! And after him in February is 70 years old! Not much younger and Joe Perry: him in September, turns 68. Although, Joe has captivated the audience not extravagant and virtuoso playing on his battered old guitar. His skill as a streak of gray hair on the head, remain unchanged! However, such advanced age musicians is not something amazing. You may recall the legendary "KISS" or "Aerosmith", speaking on the same stage a year ago (incidentally, also with the support of "SAV Entertainment"): the Floor Stanley, gene Simmons, Steve Tyler also was from 66 to 70 years.

Johnny Depp from the stage flew other gifts. The most notable of them were women's handbags. It is difficult to say where the fashion is to throw on stage in his underwear and how nice it those or other musicians. However, johnny is one of them hung on the microphone stand and the other is attached under the guitar strap. A pillow with a picture and flowers laid at the scene. Plush Cheburashka toward the end, took with him to the scene.

Of course, not curls, wreaths and bras were the main events at the site. The main thing was the music. It was executed exactly two dozen songs, two of which are for the encore. Moreover, their vocals showed off other musicians. Joe Perry performed the song "Combination" and "Sweet Emotion" his own band "Aerosmith". Johnny Depp sang the famous "Heroes" by David Bowie under the video with his photos, and the song "People Who Died" group "The Jim Carroll Band". Kris wise became a singer for the song "Ace of Spades" from "Motörhead": he has quite convincingly turned out to sing Lemmy.

Of course, the main vocalist for the evening was "great and terrible" Alice Cooper. He with his usual artistry performed the song "Spirit" ("I Got a Line on You"), Love ("7 and 7 Is"), The Doors ("Five to One / Break On Through")," AC/DC" ("The Jack"), The Who ("Baba O'riley"), "Tiny Bradshaw" ("Train Kept A-Rollin"). Many of the songs were also accompanied by visuals with photos of the musicians: Jim Morrison, David Bowie, Lemmy, Jim Carroll, and others. Sang covers and on himself: "I'm Eighteen" with the same wreath on his head and "School's Out" encore. Sounded in his performance and half a dozen of the tracks "vampires". One of them is "My Dead Drunk Friends" was dedicated to deceased friends-musicians and, in fact, one of the reasons for such early withdrawal.

By the way, the revived Alice Cooper club "Hollywood Vampires", by his own admission, now also without alcohol.

The final chord of the entire presentation was a performance of "Another Brick in the Wall" by Pink Floyd, which together with the musicians on stage the whole audience sang along! An additional touch of steel large balloons with the logo of the group that many flew to the audience.

At the end of the guitar picks and drum sticks got the fans, flowers and gifts - artists. Mr. Cooper introduced all the members of the group, not forgetting to mention that the role of Alice Cooper played "the bloody vampire in the world!" Words of gratitude from the "vampire" the audience sounded Russian, Spanish and English. As with any show, the concert ended. In the performance of the songs "vampires" none of the artists and spectators has not suffered.

Main result appears, is that real rock, performed by great musicians without any mind-blowing light shows and technical bells and whistles even after 50 years, finds a lively response in the hearts of people regardless of their age and situation.