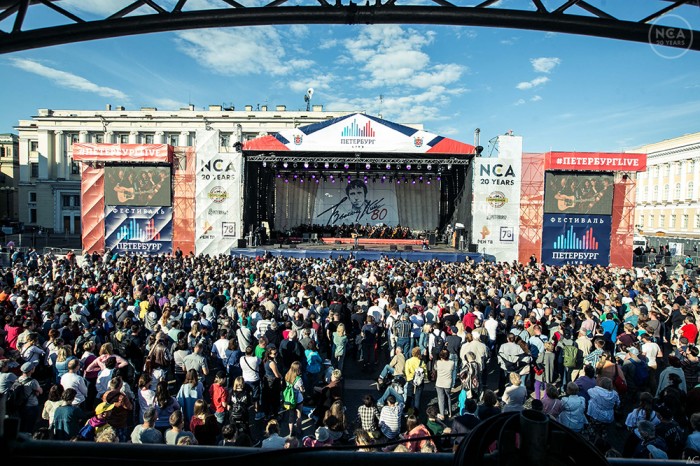 June 2, 2018 in the heart of the city on Palace square festival "Petersburg live", dedicated to the 80th anniversary of the legendary Vladimir Vysotsky. The festival was sponsored by Nikita and Arkady Wissotzky and gathered on the same stage famous artists who sang their favorite songs from the repertoire of the musician's own interpretation.

The festival featured Nikita Vladimirovich Vysotsky, heartfelt reading the poems of Vladimir Vysotsky. From the stage he thanked the artists, the organizers, the city and spectators for the memory and love of Vladimir Vysotsky's creativity, stressing the importance of the festival and of the musical heritage of the poet in people's lives. Nikita Vladimirovich said that he liked Petersburg and it is here that he wrote his first song "Tattoo" and "I grew up in the Leningrad blockade".

The host of the festival was the fiery Alexander Malich, who not only held the attention of spectators in the Palace square all night, but was able to create the right lyrical atmosphere of the festival dedicated to Vladimir Vysotsky. The air was filled with the joy of belonging to a legend and a sense of mild nostalgia. The audience of the festival was a unique opportunity not only to enjoy favorite songs but also to witness rare footage of the musician's life. In between performances of the teams on the screens showed excerpts from the film,the family archives as well as interviews with ordinary people of all ages about Vladimir Vysotsky. During performances videos were broadcast, reflecting the mood of the songs and enhancing the musical effect.

The festival was opened by Max Ivanov, the leader of the group "the feed bag on more abruptly", thanking Vladimir Vysotsky for heritage, school of life and love, he performed in the classic sound of the song "Ships will stand" and "the Ballad about love". At the first chords of Palace square became a place of unity of souls and moods.

Vasily Gerello, soloist of the Mariinsky theatre, picked up this spirit and under the loud applause of the audience sang "Here paws of fir trees", literally crushing his voice, Palace square.

The discovery of the evening for the General public was Maxim Ermachkov, which is so heartfelt singing that it seemed it sings Vladimir Vysotsky. And "Billy's Band" wowed the audience with their amazing interpretation and an unusual performance of the song "Tale of evil", is transferring the meaning of the song, leaving no one indifferent on the Palace square.

One of the most disturbing was the performance of Alexander krasovskogo, the leader of "Animal Jazz", which is so emotionally sang "Farewell to the mountains", that every word penetrated deeply into the soul of the viewer. The musician admitted that when he was rehearsing the song, his girlfriend didn't even hold back tears because of the depth and wisdom of the text.

The audience were so fascinated by the events that simultaneously launched a variety of paper airplanes, symbolizing the beauty and ease of the evening.

The legend of Russian rock scene Alexander F. Sklyar with a group "VA-Bank" has completed the festival. The voice of the musician, it seemed, not only captured the Palace square and the neighboring streets and avenues. The power of percussion to augment the lyrics, immersing the viewer in the life of Vladimir Vysotsky, which was filled with drama and incredible wisdom. I finished the last chords, but the guests of the festival were partying long, enjoying this fine evening.

Festival "Petersburg live" continued the good tradition of the annual music meetings outdoors and is considered one of the main cultural events in the life of the Northern capital! A four-hour festival brought together famous performers not only St. Petersburg, but throughout the country.

Numerous applause, tears of joy and gratitude – the feelings and the emotions of the guests of the festival "St. Petersburg live". Many viewers shared their photos and videos in social networks, noting favorite bands and peace festival atmosphere on this beautiful June evening.

"St. Petersburg live" can rightly be called a large-scale music festival for the whole family and friendly meetings. On Palace square has the youth and the older generation, parents with children; those who found Vladimir Vysotsky and those who learned about it thanks to the film "meeting Place cannot be changed" and "Vysotsky. Thank God I'm alive". The festival brought together people of different ages, social statuses and nationalities, because real music has no boundaries.

Festival "Petersburg live" was held with support of Committee for culture of St. Petersburg and drew on this day at the Palace area of about 30 000 people. The festival was held, but his songs will long sound in the hearts and souls of all who was that night on Palace square.