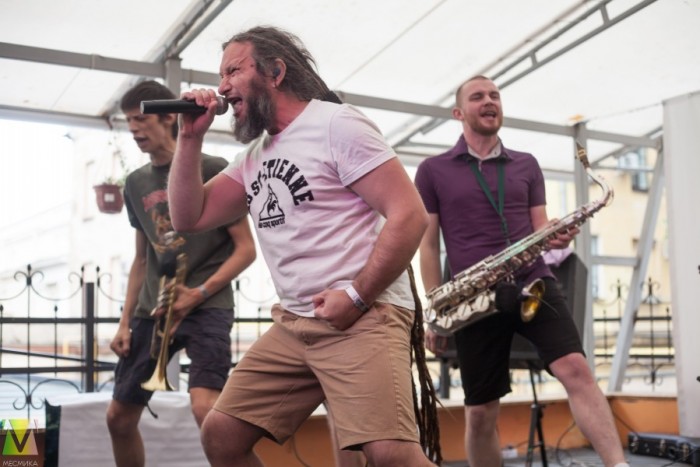 This Saturday, June 9, "fathers" domestic ska-punk "Distemper" rocked the roof of St. Petersburg "Mod" years of brutal dose of positivity. It was hot, dancing and, as always, reassuring.

Lovers of music rest a long time do not need to explain what this wonderful seven "takes" that invariably almost 29 years collects as a dense space of any size several times a year in St. Petersburg. No wonder almost every song is invigorating and mood, positive Outlook, bright thoughts and beliefs. Many of the tracks with cheerful motive for restless legs there are sober thoughts in the texts themselves. The team plays in all circumstances with dvukhkomponentnoi impact and therefore receive the answer is always Vyatich hoarse and happy guests.

On the date of the concert fell 10751 party day of the group's existence once the "Crisis secession" and 203 tracks from Studio albums.

The track listing for the concert consisted of the beloved fans of "eternal" hits guys that that night was not moving and did not sing except that the only furniture. Started with "Pride," he finished, as usual, "
Big Tits" - ingredients evening under the text. The group is faithful to its tradition of turning to the pool every club, and fans are faithful to their habits to maximize rest at any track in all ways. So, if you catch the rechetativa Ducenta on superboevika "In mirrors of my hope" or "Dream" under force far not to each fan, then arrange a crazy slam with acrobatic effects under it is they are always "in". Like under a powerful "Hurricane", or "na-na-na!". But the huge hit "All pussy" or "Pride" hall prefers to roar each other in the ears. On other songs the audience has a choice, for example, under the "Everything is fine" or "Math" - dance waddling or still sing. Under the "most lyrical" song – "I die for you" - people on the dance floor managed to do it all, and even symbolically to die on weak beat established flashmob.

Perhaps the most unpredictable moment in the concert part of the evening cocktail was pulling out of the chest, two rarities is almost the only one in the group love lyrics "Tears" (2005), "rugged, positive" (2013) again explains that the good should be with fists, but in another way.

The evening playlist of masterpieces Distemper diluted with two-thirds of the tracks from the latest album "a World split in half", including those already included in the top to listen to the anthem "life We do not ask for forgiveness," dance "Hold me tight by the hand," bright "Trembled the world monotone", and of course topical "All the pussy". Without the latter, by the way, the fans already and would not let go his band in the scene, so the success of this track is obvious. Well, about crime opus "Your big Boobs", vcard group, composed spontaneously one day in the locker room, even say nothing – it was required, got it, sang it and it left the roof wet and satisfied guests of the club "Mod".

Signature two-hour fitness marathon from a group of "Distemper" - what exactly have intelligent Petersburg times in the season as an effective vaccine against boredom. Following vaccination, as announced by the boys themselves, will take place 22 September – on the occasion of the birthday of the group and of the club. And you should be there!