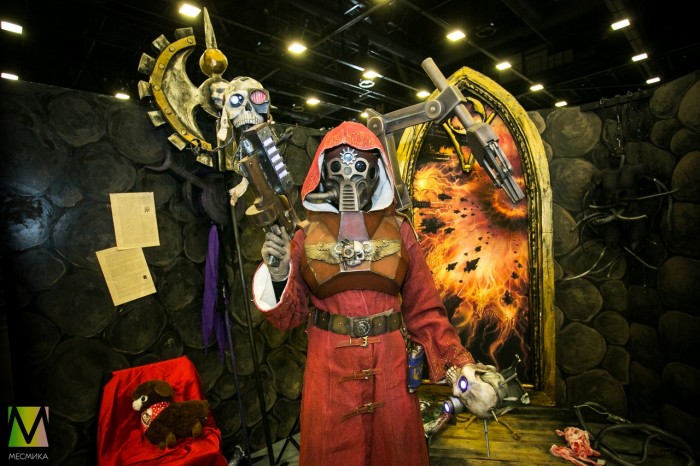 In St. Petersburg over the weekend in the walls of the Expoforum Convention and exhibition centre held the 19th annual science fiction festival "StarKON", the guests of which were 22 thousand unique visitors. Visitors were presented the two-day program with a unique standmi, bright cosplays of your favorite characters, movie hits and lectures.

Robots, TeslaModel S, virtual reality: we have tried to show that modern technologies are increasingly interwoven with what we used to call science fiction. In addition to R2 - D2 that chased the kids and flirting with beautiful girls, visitors could see the following:

For the sixth time at "Starcon" was a popular scientific conference "Parsec", together with the educational project Lectorium and the Federation of cosmonautics of Russia.Visitors can meet astronauts, famous scientists and popularizers of science. More than 30 presentations on space, space exploration, robotics, astronomy, Cybernetics, science fiction, medicine, economy and industry.

This year "StarKON" tried out a new format: the Open living, meetings were held with well-known presenters and bloggers, workshops and quizzes. On 10 June the guests of the "Starcon" was the opportunity to meet with Leonid Yakubovich.

On 11 June a meeting was held with the blogger and Creator of UtopiaShowЕвгением Popadina, "NinjaAction | Ninja thing" they talked about creating animations on the knee, and representatives of the Union of cinematographers of Russia has organized a round table where he spoke about the film industry and the nuances of working in the field of cinema.

One of the main events of the festival was the cosplay contest: participation of more than 200 cosplayers from all over Russia in the images of all your favorite characters from games, movies, comics. For two days they had a fight in 25 categories.

The cosplay contest on Starcon has always been an important part of the festival program. Many participants begin to create their costumes for the future "StarKON" almost immediately after the previous one. That is why members of the jury were famous cosplayers: Alexey Travkin, Grigory Hayrapetyan, as well as specifically for "StarKON" to Russia from Miami flew in the famous cosplayer Jonathan Stryker.

An important role at the festival "StarKON" took 25 booths, which gave the guests be bored for a minute: Star wars, LeagueofLegends, Supernatural, TheElderScrolls, Warhammer 40000, MetalGearSolid, Firefly and other favorite universes.

The team that created the fan stands, was once again struck by his enthusiasm and love for bench universe. In areas of each universe, the guests were fantastic the scenery, quests, tandanya stores and the heroes of their favorite movies, books and video games!

The booth also participated in the contest by the nominations:

In 2017, "StarKON" was on the verge of closing. And only a huge support has helped the festival to overcome the crisis. This story made us on their own experience to feel the difficulties faced by the needy in our country, and change views on a number of fundamental "StarKON" issues.

Cooperation with "AIDS.CENTER" Fund of aid for HIV and AIDS was the first step in a new direction. On the "Parsec" could listen to the lectures, giving the opportunity to get to understand the issue and dispel existing myths and misconceptions.

Despite the fact that in 2017, "StarKON" faced with the crisis and difficulties, the past, the event was successful for us, which is why we proudly step over raised before us challenging and we are happy to announce that "StarKON Halloween" will be held on 3-4 November 2018.

SPECIAL THANKS TO THE PARTNERS:

The General partner section of the movie – entertainment channel SonySci-Fi

Special partner of the festival - Gazprombank

All screenings in 3D was carried out on the equipment of company RealD - official partner section of the movie, allowing viewers to enjoy a new film in the best quality possible.