Friendship at the festival "Kino. SOLSTICE 2018" 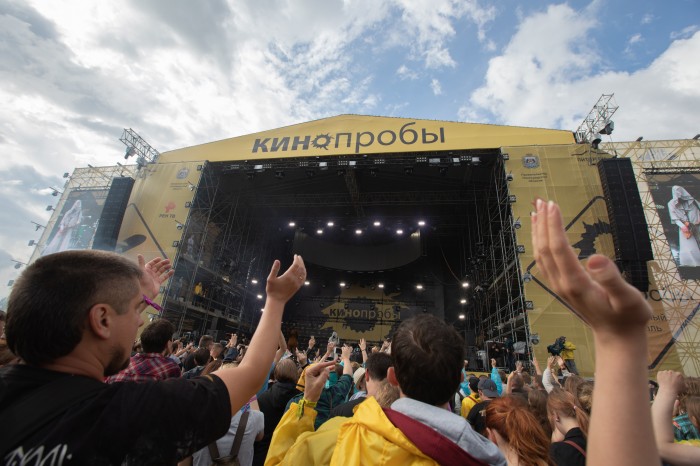 Last weekend in the Novgorod region occurred a large-scale music festival "Kino. Solstice 2018". Convenient location between Moscow and St. Petersburg made it available to residents of the two capitals and joined friends at the airport Antalia. Over 3 days the festival was visited by more than 34 thousand people.

This year a large-scale open-air was opened in the night of 22 to 23 June with a symbolic minute of silence dedicated to the Day of memory and grief. After came on stage the first festival headliners – group "DDT". Shevchuk began his speech with the seventh "the siege" Leningrad Symphony of Shostakovich, then sang "Dark night", and then "Blue handkerchief", thus paying tribute to the victims of the great Patriotic War. In addition to well-known and beloved hits - "You are not alone", "last autumn", "Wind", was performed and the new songs recently released album, "Gal, go."

"The festival is a good, idea excellent. Choi wonderful songs he wrote and sang, and those songs are so good that the whole country sings them – it's worth it, of course. And the fact that his birthday is celebrated at the festival – it's wonderful! And especially glad that the weather was fine. I was messing, I prayed when I saw these clouds. Sava God, everything turned out" - shared his impressions of Yuri Shevchuk.

For 23 June was filled with a huge number of much-loved hits as well as songs, which, of course, expect for being in the top. The line-up surprised the guests with its variety. Along with all known groups of Pilot, Dolphin, Alice, Kalinov most, Louna, EORSI, Clay, Dайте Tank (!), Refining, audiophiles pleased local performers Annabel, OM, Blackbird, And project. The sensation for the audience was the performance of German bands Mordorи Tanzwut, who jointly performed the song Tsoi. Concluding remarks group Tanzwut spoken from the stage, was "FRIENDSHIP," which, of course, sounds like a motto.

The second day of the festival was opened by performance of legendary group Княzz. By the way, I must say that the most important football event - the "world Cup 2018" - has not bypassed and "Kino". "DDT" and "Княzz" performed at the festival of their hymns. And Yuri Shevchuk the idea of recording a song arose spontaneously:

"I wrote it literally in about five minutes. Actually I'm not a big football fan, but I like what happened in Russia, what is this world Cup, very cool. So many weirdos who hate everything that is beyond the borders of Russia. And that's "all" we have arrived, it turned out that they came to the merry, reckless, wonderful, kind, humane people. And I think that Russia really will help you to become more fun, not to go dark on the streets. It turns out, can be simply photographed with the police, to sing songs, to share with people with laughter and joy."

All day was pleased with its performances, the group Network, Buckwheat, Narimono Theophanes, Sergey Bobunets, 25/17, Brainstormи many others. An unusual event was the speech by Leonid Agutin in the event of such format. The artist himself would be impressed by its incredibly warm reception by the public:

"When I called my Director and said that he received an offer to play at the festival "Kinoproba", explaining that the condition is the performance of one song of Tsoi, I agreed immediately. Although, frankly, it was a bit scary, after all, in front of an audience of rockers I had. Took incredibly soulful, sing along and supported – thank you all very much," - said Leonid Agutin.

The festival was closed on Sunday June 24 group b-2 and their "Event Horizon", the band was also surprised by an unexpected duet with Theophanes Necromayhem who sang "Whiskey". After the end of the set the band came on stage the producer of the festival Yury Dontsov, who invited on stage the whole team "Auditions" and announced the dates of the following openair– 21, 22, 23 June 2019:

"I'm happy and devastated, we did it. A very important achievement is incredible and the positive atmosphere of the festival. It was noted by both the audience and the actors and all the staff. We are in the very beginning, and have such results, takes my breath away thinking about what lies ahead! Thanks again to all involved! A-GU-TING!"

Of course, the music at the festival is prevalent, however, "Audition" is kind of a small town with its own infrastructure. The organizers took care of the comfortable stay of the guests openair: provided drainage taking into account different weather conditions, installed shower cabins with hot water, where everyone could take a shower absolutely free, and brought together more than 120 volunteers from Veliky Novgorod who helped guests and organizers of the festival to maintain order on the field.

Of course, at the festival you can find a lot of non-musical entertainment. So, animators Mosigry presented a variety of Board games, taught everyone and made up company.

Broke away childish guests in the children's area with inflatable slides, trampolines, Zorbas, merry-go-round and throwing a tyre. For those who like to keep themselves in good shape on the field, and held sports tournaments in football, volleyball, badminton and table tennis.

The flavor of the middle ages felt at a real knight's town. Here the guests attended master-classes on blacksmithing and pottery, took part in knightly tournaments and watched demonstrations, tasted himself in the battles on tembaro and more.

The Novgorod region did not remain on the sidelines and prepared a open-air a number of interesting surprises. So, everyone was able to make cool pictures in photozone; tried his hand at rafting right on the field and participated in intellectual games on the novgorodica.

Educational project "Your Story" was presented by ROCK TALK "ABOUT..." is a project dedicated to the 35th anniversary of the Leningrad rock club. Within it, guests were presented one double lecture and musical program, poetry, photo, street art and more associated with the activities of the cult rock club. The creators project held a series of public discussions within the cultural area of the festival, lectures and informal conversations with the heroes and witnesses of the era.

Another unique area at the festival is the first traveling exhibition of the national Museum of rock music "REALITIES of RUSSIAN ROCK".

In Okulovka the Museum presented historical billboards, posters, magazines, records, tapes, and, of course, musical instruments legendary teams. Read more about this we told the Creator of the rock-Museum of Vladimir Rekshan.

There are some guitars: one guitar – a bass guitar, on which was written the first album "Aquarium". Played Mikhail Vasiliev-Feinstein, is now among us no, he's in other worlds, but the tool will be presented. Second, also bass guitar. This group "Alice". In 1985, the American girl Joanna Stingray came to do our musicians. Gave this bass guitar YAMAHA. Was presented the old poster of those times where Peter Samoilov is with this wonderful guitar.

POST of Russia at the festival Audition. SOLSTICE provided a unique opportunity for guests of the festival. For the first time in the festival history of the country guests Arapaho send email directly from the territory of the event. The post was in walking distance from the stage, and everyone could send a postcard anywhere in not only our country but around the world!

The festival is young and is just beginning to gain its audience. The prospect of growth was worked out in a socially responsible ticketing policy. Parking and places for tents at the festival was free, and the cost of entry to the festival starts from 750 rubles.