Heat on the street and in the heart - how was the summer concert of Denis Mikhailov in St. Petersburg 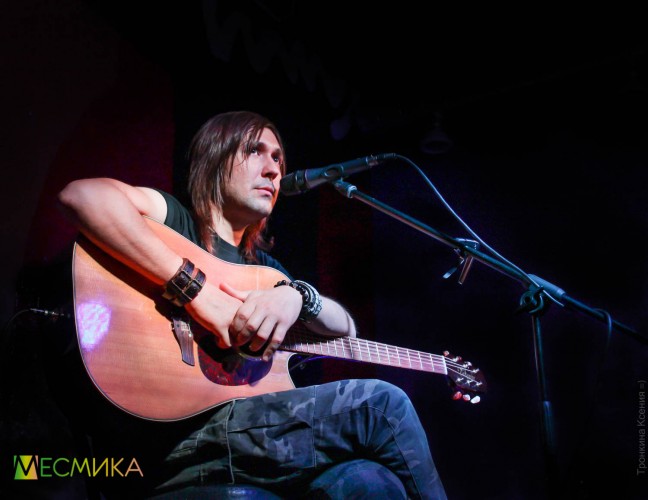 Not often in the same person meet the qualities of the wonderful musician, a talented poet and a singer. Sometimes it is absolutely amazing phenomenon can be found in the city of St. Petersburg, where visited with concerts the group leader "Both rivers" Denis Mikhailov. On June 28 he arrived solo acoustic performance has traditionally been the club of the "Box".

The weather that day was pleasing Petersburgers surprisingly bright sun, was fabulous and unusual summer. However, even in such a brand concertin season in "the Box" has gathered decent fans, "Both rivers". In any case, they had to create the usual in the case of Denis warm atmosphere.

The performance itself repeatedly interrupted the communication of the musician with the audience. At least this time the audience spoiled with my questions, but those that were, Denis Mikhailov answered comprehensively and with pleasure. For example, have promised a new album soon, details on the celebration of the fifteenth anniversary of the group, in whose honor will take place this autumn tour, talked about which songs are sung with friends around a campfire.

Told more about Dennis and why the more emotionally intense songs in the works "Both rivers":

"Those feelings that cause laughter, they are less deep, let it is high quality satire, classic. Even not quite tragedian, even today, it is closer to the Russian soul. The sparkling satire leaves more indifferent, I don't know why. Probably a psychological warehouse of the soul of the Russian people. Well, we have a lot of fun rock? There are, of course, now all the vector of ideological change. It's scary when the minds of young people excites a phony. Russian rock began with attempts to understand the life that surrounds you, against the people and the world, the country, and now many popular projects, they do not guide the person on this demand. Don't want to call the names of the musicians, but scary for the youth."

As always, clearly showed themselves the representatives of the fan club. They are generally very sensitive to the mood of the songs and the whole atmosphere that surrounds "Both rivers". Because they are flash mobs always exactly fit into what is happening in the hall and on the stage. That night it was flowers of led lights, bubbles, on the song "Bee-cell" charming balloons in the form of bees. Dennis, by the way, separately, his fans were thanked and said that the order had during the evening to Orient quickly in a situation, since the track listing was changed by the mood at the last moment.

Assembled the set list was of the most peaceful and beautiful songs mainly, and eternal and binding like "You" and "goldfish". Surprised by the lack became one of the biggest hits of the album "Here" of the track "Best of all possible worlds". Sounded "Childhood", but these two songs are connected logically: how on the album, not for nothing are next to, and in the General meaning. But played all the singles released after the album: "My April" "Wax melts", "Good luck".

The concert of Denis Mikhaylov took place in the usual friendly atmosphere. However, he noted during his speech that the public has become more tense that it is difficult to shake the audience. However, this task Denis got it done by the end of the evening already and we were singing, and smiling more, and the activity showed where alive. Warm, soft, light energy leader, "Both rivers" will melt the ice of even the most indifferent of the listeners, but such at his concerts just do not happen.