Revolution on the "Great square" - that resulted in the Union of two young St. Petersburg festival 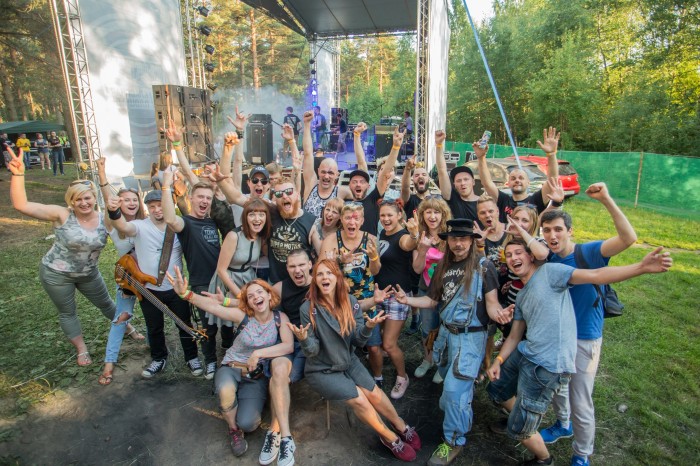 You can always go to work alone. But when your ideas are supported army like enthusiasts, patients with the same thoughts, wonderful things are happening faster and more successfully. In 2018 St. Petersburg, the Revolution Open Air festival, which traditionally closes the entire year preceding the competition among the young teams in many cities of Russia, obidelsja with the festival city kuzmolovo Leningrad region, "Classy area." This collaboration resulted in an incredibly emotional and interesting for music lovers the celebration held on July 14.

On the Sabbath day stood as the winners and runners Revolution, and the winners of the "Great square", which allowed the audience to expand the list of new open bands. Came on the scene: Skrippingrope, VireDictum, Nightcall, Red God, Thesoundsofsilence, Olesya, Black Radiance, Headly, Riggan, Wire, Ze Brosband, bye, Bears, Big Lebowski, PSylociD, Ashes Collide. The headliners of the festival were the group "Starlings of Stepanova" and Louna!

Separately want to mention that admission was free was enough to get complimentary tickets in advance. Given that you could hear Louna, many came from afar, were guests even from Kaluga, for example. Not every day is a chance to hear musicians of this level for a "thank you".

However, in addition to music, guests had something to do. In the first place, considering the established in the Leningrad region the heat, it was possible to relax in the shade of the fir trees, sunbathe, just lie down, not leaving even far away from the stage. Activity was not so much emphasis on such events still on the musical component. However, the territory was organized playgrounds where you can play football or volleyball. The evening block was discovered (unexpectedly) a whip show. This show definitely can boast a rare festival.

With food, and that is especially important in the hot summer, drinking, problems were not, the courts were working at full power, with different tastes and at very reasonable prices.

Still, the audience came to the joint brainchild of two festivals not only for the sake of bread and activities. Everyone was waiting for the music, and waited, which is nice, the followers of different directions. What is remarkable about such events, so it is a variety of styles. To hear something interesting whoever you were: a punk, a metalhead or a fan of lighter music.

Most viewers were waiting for the band Louna. When Lusine Gevorgyan gang appeared on the scene spontaneously formed dance floor started going wild excitement. There were many children who, judging by the reaction, at a rock concert was the first time, well, or looks exactly rare. And then, among a little stunned the unprepared audience, danced, jumped, screamed, sang in unison, rushed to circlet and slam, shaking fists, shouting "kill!", a long-standing and understand the energy of the concert fans. The performance came out very hot. Several times Lou said with a laugh, as she likes the situation and tried with the other participants to remember when the last time you had a chance to play in the woods.

After all Seth was able to take a picture and get an autograph pretty quickly, the musicians came out of the dressing room to the fans.

As noted by the presenter of the concert Anton Denisov after departure Louna: "the Mood at the wedding. The couple left, and the guests have left and rest themselves, communicate".

Evening block musicians closed two impressive groups. Ze Bros band struck an unbelievable amount of light and warm energy, and needless to say, if the leader of the team was personally invited spectators to the stage and called to dance.

Ended a fabulous day with a performance by the St. Petersburg "Skvortsov Stepanov". It started traditionally with charging them over as their iconic set. Those who did not wait for the end of the evening was lost a lot. No "Starlings" can't make it clear to your listeners - whatever happens, whatever the f*** in my life did not happen, it is only a sign that something is wrong, it is necessary to leave the wrong road. And, of course, to take an example from Lehi, as sung in one of the new songs - not to see how bad, break the rules and learn to be fun.

The holiday ended with the appearance on the scene of all the musicians of the Revolution Family. Once seen as a close-knit, friendly and just an open and fun team. Otherwise, how else can you organize an event where every guest feels close relative, best friend and most desired character in the ongoing story. Thanks to the festivals of the Revolution and the "Great area" for a wonderful day for all.