Anatoliy Sklyarenko: Let's not engage in harassment of the oldest festival in our country 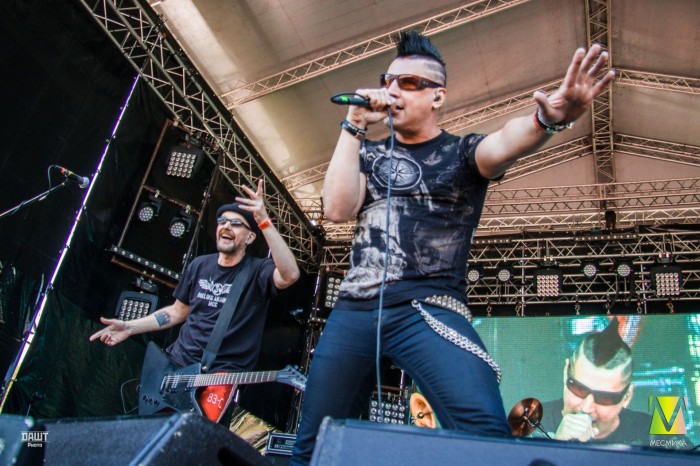 In the last few days, "team contract" shocked fans several news. Some of them can't be happy, some people really upset. The question now, of course, about the departure from the joint work unchallenged for nine years Director Ilya Zolotukhin and unexpected confirmation of participation "Contract" in the "Invasion". Mesika long friends with the group and therefore could not ask the frontman Anatoliy Sklyarenko what is happening within the life of the team, as it relates to the noise around "Invasion" and why the road went with Ilya.

Hello, Anatoly, of course I would like to start with the question that everyone is concerned is the departure of Ilya Zolotukhin as Director of the group. What happened? Was it his own decision or he had to leave at the request of other team members?! Have you managed to stay on good terms?

Hello. The decision was made precisely Ilya, but taken without any scandal. It was announced to us a while ago, and as a true friend Ilya said that he is ready to go immediately, but when we are ready. Of the reasons I say would not, it is the internal Affairs group. Sometimes the way people disagree and that's fine, this is development, there is nothing wrong. Actually, as soon as we were announced the decision of Elijah, we began to prepare for the time of his departure, and as soon as we prepare for a new phase in the life of the group, we reported this to Ilya, and then he stated this publicly.

— Is there a connection between the departure of the Director and your contact with the festival INVASION? You have previously reported about the refusal on the part of the organizers.

— No direct connection between these two events there. About the upcoming departure from the band Director has been known to discuss our contact with the festival. And what we said on the day following the publication of treatment of Elijah is just a coincidence. But, by the way, the sequence of these events turned out to be correct. The fact is that preparing for personnel changes in our team, we started looking for new partners with whom we have to work on our future performances. And it so happened that some of the partners have direct relevance to the festival. Thus it is said that reviewing the future concerts, it has affected the festival INVASION. Given the new circumstances, we managed to find a compromise, where our participation in the festival became possible, both for us and for the organizers.

— What about pride?! After all, earlier it was reported about the failure on the part of the organizers.

— Yes, the original rejection of us, of course, upset, but understand that in today's world not all is determined by creativity. Very much depends on what arrangements and agreements you have with various partners. Exactly at the moment we could not accept the terms, but in new circumstances with new partners all the disagreements were resolved, and representatives of the organizing Committee changed its decision. The offense is nothing, absolutely working situation, and hurt feelings here, too, say no.

— Should we understand that the organizing Committee wanted to invite you because Ilya Zolotukhin, and everything changed with his care?!

— What a load of... With Ilya we went to the INVASION of 2010, and any problems never arose. And, believe me, as for this year, it's definitely not in it.

— Well, well, is there some connection of the application your involvement with the mass failure of other punk bands from participation in the Invasion in connection with the support of militarism?

— These two events did not exactly related to each other. If you carefully read the publication on the festival website about our participation, you will notice that the decision was taken after the press conference, which took place even before you mentioned "massive failure". Yes, and it is difficult to call refusal of the mass, when several dozen, if not hundreds of groups, stated that 5-6 teams. It's more like some kind of PR campaign. Yes, perhaps, between these teams and the organizing Committee there was some misunderstanding, perhaps, even someone broke their original agreement, but that's their business, it does not concern us, our team of this conditions were not.

— So you support the presence of tanks at a music festival?

— I do not understand why creative people are constantly trying to hang any labels? Why, if someone did not support a certain movement, he immediately becomes the enemy of the movement?! Tanks on the INVASION appeared 5 years ago, and I've never seen any symbolism. If I am not mistaken, the first time this confused Andrei Makarevich, and his statement made a lot of noise. Apparently that's when the outrage about the participation in the festival by the Defense and originated in the minds of other musicians. Anyway, previously, neither of whom I have no protests on this issue not heard. Now it has turned into some kind of fashion thing. If asked to list the participants of the festival, it can do not everyone, but the names refused now on everyone's lips. Yes, some bands do sing anti-war songs, and probably their performance in such conditions is really not quite appropriate. We're not playing the music of protest, we sing about something else, despite the fact that our creativity, many attribute it to punk rock, but we don't get stuck in these rigid frameworks.

As for the cooperation of the festival with MO, I can't definitely say it happens at the initiative of orgkomiteta, or is it a compromise with the authorities that give the opportunity every year to conduct the festival without any problems. Over the years we have visited dozens of festivals, sometimes the festivals ended before it began, due to conflicts with local authorities. Believe me, the sudden cancellation of the festival is far more terrible problem than the exposure equipment, the entrance to which is optional. Let's not engage in harassment of the oldest festival in our country, which gave good emotions to thousands of people.

We don't sing their songs standing on the tanks, we sing them on stage. Yes, somewhere close to a military town, and look at it or ignore it — everyone decides for himself. We encourage everyone who wants to see military equipment just to spend more time at the scene with good music. Come to our set!

— Do you continue the communication with Ilya Zolotukhin after his departure?

— I think, Yes, why not. We did not swear. Also always glad to see it on our statements.