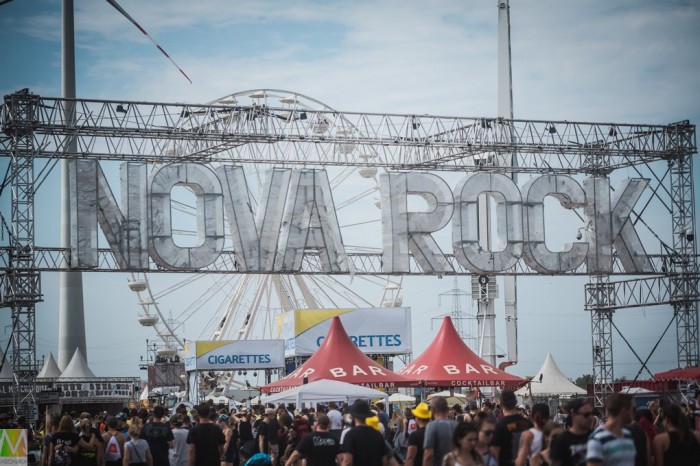 Austrian rock music festival held near the town of Nickelsdorf, virtually on the border with Hungary and Slovakia that provide a multinational visitors.

First time Nova took place in 2005, and since then, the festival, held annually in early June, is a major music event in Austria, which was eagerly awaited by thousands of fans of good music.

In 2018, the festival was held as the last two years, four days, from 14 to 17 June. However, many visitors to the festival come for a day to get the best seats at the camping and left later, not wanting to leave the atmosphere of the event. For four days the festival was attended 220.000 guests.

How to get to the festival?

The festival takes place in the fields, 7 km from the nearest town of Nickelsdorf, so transport information is very relevant.

1. Of course, the festival can be reached by car. Parking won't be a problem, but remember that the later you come, the farther you will rise. In the end, and about 15 minutes to walk to the main entrance to the festival, if not in time to hurry up.

2. From Vienna to Nickelsdorf, there is a train, the journey time is 40 minutes, the fare there and back 20 Euro. Trains quite often, depends on the schedule, but every half hour can be expected. Further, from Nickelsdorf to the festival area goes Shuttle bus, the cost of which this year was € 7, you can use an unlimited number of times.

3. From Vienna also runs a special Shuttle bus, the cost one way was 16 euros. The bus has a Luggage trailer you can safely take the tent and all the necessary things with you. The road will take just over an hour.

4. Also nobody cancelled a taxi. Pretty budget will come from Bratislava, about 35 euros. From the vein in the region of 100.

There are many types of tickets, mainly the cost depends on the type of accommodation on the festival.

A standard ticket for 4 days this year, worth 180 euros. It gives the right to put up a tent in the usual tent camp.

The ticket for one day cost 80.

VIP ticket with access to VIP-tribune, VIP-Parking with a separate entrance and its camp - 250.

Also the cost of the ticket is added to a certain amount if you decide to choose one of the following types of accommodation:

- Caravan (the ability to put your house on wheels)

Green camping (the most pure of the campsites)

- Tent hotel (tents with two beds already prepared for you, you don't need to carry with them).

At the entrance to the festival your ticket will be exchanged on a fabric bracelet that you'll go all the days of the festival. Also at the entrance you will have to pay 10 € for garbage. You are given the package, if you fill that up, the Deposit will be refunded.

Here introduced a very convenient payment system: you will be issued a plastic card that you put money everywhere paying the price. At the end of the shoot the remainder. No need to mess with the cash that we think is a huge plus.

The territory of all campsites are equipped with multiple toilets, urinals, showers, recharge centers phones. For a fee you can rent a locker. If you have values, then it is simply necessary. The tents are often made raids, better than nothing to leave.

Red cross workers will always provide you with free medical care, if required. The police walking on the festival grounds, but all the pickpockets and scammers, of course, she will not stop, so you need to be careful and always watch over things.

On the territory of the festival offered a great variety of stalls with fast food. Here you can buy literally everything from hot dogs and ending spit-roasted Piglet. The portions are not very small.

Drinks are also a huge selection. When buying a drink takes a Deposit of 1 Euro for a plastic Cup that when taking the glass back. The main drink is a Austrian beer Ottakringer, which literally flows like a river. If you stand near the stage and unable to leave, and thirsty, will save you carrying the drinks. But their prices are a little higher.

For those who decide to save in a regular campground several shops. The range is small, but not stay hungry.

Particularly popular meat and sausages sold in the shop in the area that immediately after purchase you can fry at one of the hundreds of free grills.

Drinking water can collect for free at one of the many taps.

The festival is rich in entertainment. There's a few rides which offer a great view of the whole festival. And bungee jump that is fixed on the top of the crane. And a lot of flash mobs, discos, karaoke, and other activities from sponsors of the festival. It is possible and to play the guitar, and virtual reality glasses to try, and more.

And, for the most determined, put up tents with tattoos and piercings. When if not now?

On every corner you can find tents with merch. You can buy official merch of the festival, and favorite bands.

There is also plenty of tents with the usual or designer clothing, Souvenirs, sunglasses, and this year was spotted a tent that sells plants “weeds”, grass, in a simple way.

The festival has two main stages - Red and Blue, which are all major groups.

There's a scene of Red bull, which, in our opinion, performing groups, sometimes more interesting than the major ones.

Another small scene made specially for novice artists, where anyone can become.

The performers play in a row sets last from 30 minutes to two hours at headliners. Occasionally two favorite at the same time on different stages, then have to break. The sound and the light is always on top.

So the festival is held in June under the scorching sun, take care to recommend protection from the sun, you can burn in one day. But at the same time, the festival provides air fresheners under which, running from one scene to another, you can at least cool off.

This year on the first day of the festival turned out to be a terrible rain, which the organizers were not ready. Parking of the Caravan did not run more than a day. In the conventional camp tents just floated, and people are literally drowning in the mud. Closer to the scene was not selected, there is a mess happening.

Despite the weather the cons this year, the mood remained positive through the day mud dried up and the sun was shining. Another dose of positive emotions was obtained. Recommended to all lovers of quality music and crazy fun one day to visit the festival Nova Rock!