Sami Hinkka: before our gig the rain ended and we got on stage in front of over 50000 people 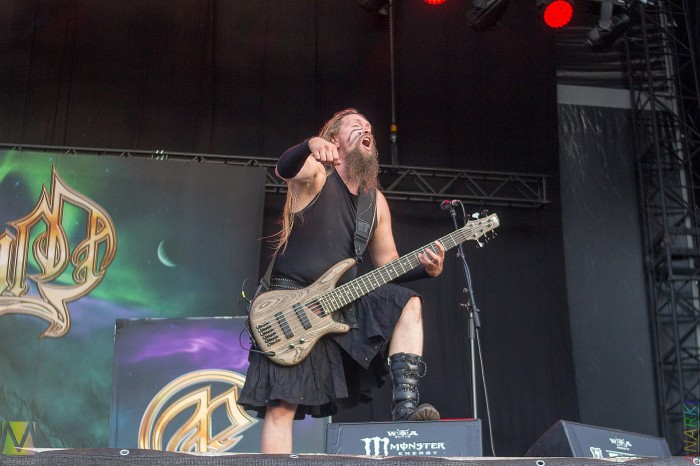 Ensiferum is a Finnish folk metal band from Helsinki playing melodic folk metal. They have played at Wacken Open Air many times and this year a bass player Sami Hinkka shared with feeling of happiness, meaning of Wacken and the most remarkable gig.

The most part of cool folk bands are from Finland. How do you think, why? May be Finland has special magic?

Sami: I wish I would know the answer for this question. I guess it has something to do with Finnish folk music and long and dark winters.

A couple of two years ago we talked to Tuomas from Korpiklaani. He said that it’s possible to combine Russian and Finnish mythologies in music because they have many common things. Have you ever thought about a song based on these both mythologies?

Sami: That would be interesting point. But I would need to get to know to Russian myythologyy much more before I would dare to use it as a source in Ensiferum's lyrics. Maybe some day.

Sami: Finland has many very good aspects. Equality, praticly no corruption, ovverall safety, free education for all etc. But happiness also comes from within. Personally I think that I'm very privileged and happy.

There is a cool festival in Russia where the audience has a chance to listen to bands from different countries (Sweden, England, Japan, France, Israel etc.). Have you ever got an invitation for Russian open air festivals?

Sami: Yes, there has been some offers from Russian festivals but they have always been at the same time as some other festival we alreadyy had agreed earlier. I really hope we can come there soon!

What is the most remarkable gig in your concert life?


Sami: Impossible to name just one because there has been so many incredible gigs during all these years. If I have to pick one now I would say Wacken 2008. It had been raining the whole day and we played quite early and we were sure that no one will come as check us out because of the crappy weather but just minutes before our gig the rain ended and we got on stage in front of of over 50000 people. Good times.

What does Wacken mean for you?


Sami: Heh, well we have played there many times (this summer was the last time) and Wacken has always been fantastic festival.

When should we expect you in Russia?