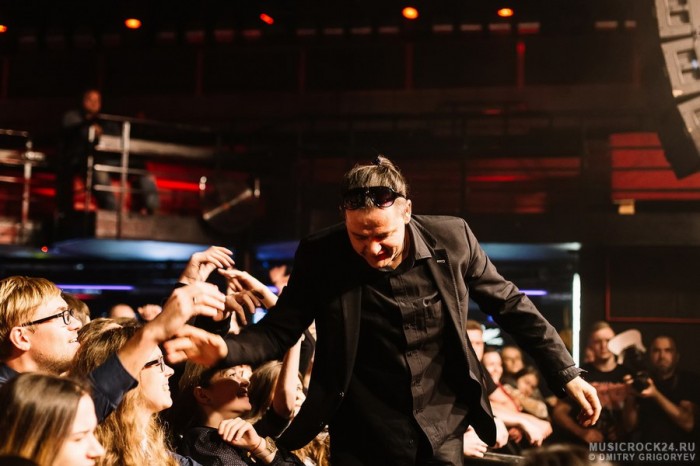 None of this was not expected, but 14 September in St. Petersburg came to democracy. Even for a few hours, but the reason was good: the band “Last tanks in Paris” celebrated its twentieth anniversary with a big concert for a selected audience songs.

Fair vote took place in the group Vkontakte and the result was a setlist of four songs. Advantage of such events is getting the opportunity to hear not only the tracks that the musicians play from concert to concert, but to remember the forgotten rarities.

Alexei Nikonov, the leader PTWP, experiments in his music is never avoided, and in the last few years was recorded duets with those who do not want to take the “old school” rock-n-roll community. For example, LSP or Bad Samurais, the representatives of hip-hop and trip-hop direction. As the “Tanks” manage to be the last real punks, without a hint of hardware fine-tuning of creativity for commercial success, the mind is not understandable.

Your warm-up PTIT choose equally obvious. It's not “young, but a hot punk-rock band”, and neo-post-punks, the group Crvena Tsvetova. The new generation, the direction and look at the culture of punk. The audience during their performances was not as much as after the release of “Last tanks in Paris”, but was received with interest by many, judging by social networks and the active support of the group already knew. Sang those, in addition to their songs, and mini-presentations recent album, the version on “the spleen” “Bend the line”. Such variations on the hits of the nineties have recently become a trend among young underground groups.

Around nine in the evening came out and the main culprit of the holiday. Lech Nikonov began his verse, showing that over the past twenty years, his poetry has not lost relevance, and only became more acute, the ability to keep abreast of and challenge to everyone who is fighting his own war puts people under a massive banner, still resonates among the audience.

We started with the song “Situation” then was “Order of things”, ”the New international”, "Toys”, a tribute to Baudelaire “Rose in the mud,” “the eyes of the cops”, “Ultimatum”, “Songs without rules” and “Useless songs”, the first time you can hear the new single PTP “Taxi”, and finally “RDX”, which was asked from the audience. It is clear that this is not all, the full setlist can be found in social networks, something important to you will find there every.

The atmosphere at the concerts of the “Tanks” are always unforgettable. This is some absolutely wild, primitive freedom. The audience burning flares, arranged stagediving broke on the scene (which, by the way, there was a small dump between the viewer, security, Alexey tried to understand and musicians. But still had to sing).

The whole atmosphere was transmitted from the viewer to the viewer, and musicians to those in the slam, VIP, near the stage or bar. Energy Alexei is hard to describe in words, even through the music, to be honest, it is not a hundred percent. Only there, only once inside this sphere, catching part of what is happening around the chaos for a couple of hours to become truly free from any imposed social norms and dogmas.