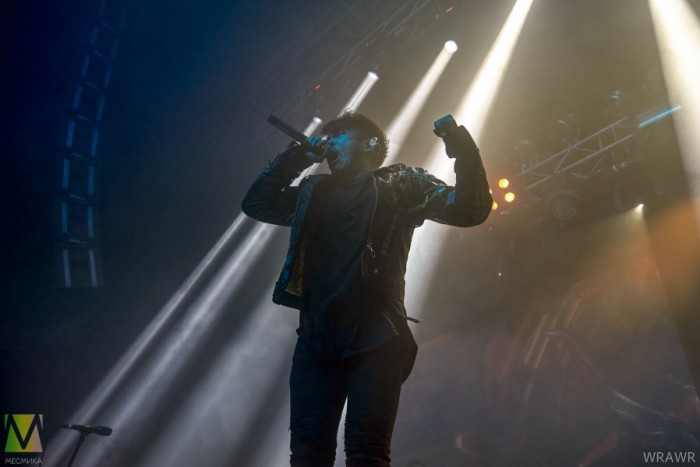 Inherent in Saint-Petersburg cloudy weather couldn't ruin 26 Sep for fans of Japanese rock band Crossfaith. This evening the doors of the St. Petersburg club Zal opened for all fans of energetic children from the country of the rising sun.

Club Zal is one of the major concert venues of the Northern capital, during the existence of the club has welcomed a large number of domestic and foreign artists. On the stage platform were such popular Russian bands as: Murakami, 2 Masha, Natividad and well-known foreign groups: German rock band Eskimo Callboy, American hard rock band Halestorm and the Swedish group Pain. Billboard Club Zal is very rich in concerts of various genres, everyone will find here exactly what he or she likes. The organization of the club at a high level: there is a separate entrance for the VIP area, at the entrance there, people can calmly and slowly to take their free things in the closet and probably going to the bar with a huge selection of drinks to kill the time.

Closer to the start of band Crossfaith, despite the pouring rain, crowded at the entrance to the club in the hope of soon being inside and take seats closer to the stage, to be able to better see their idols. The run started promptly at 19:00. The most committed fans rushed closer to the stage. And the rest were scattered around the room waiting for the concert to begin. Warm-up was not, but that didn't stop the crowd thoroughly prepare for the hot greeting of the group, Groovy music in the background and pleasant company brightened with expectation.

The concert started closer to 21:00 with the song Deus Ex Machina ("Ex_Machina", 2018). Energetic, electronic music broke the silence, and appeared on the stage Crossfaith. Fans enthusiastically greeted their heroes and welcome them with applause and enthusiastic shouts. Japanese hardcore played from the new album ("Ex_Machina", 2018) songs such as "Catastrophe", "Destroy", "Freedom", "Make a Move", "Daybreak". Total the band played 16 songs, the concert lasted an hour, which to the sophisticated audience seemed very small. For an encore, the boys sang the song "The Perfect Nightmare" and "Мonolith". Many fans expected to hear the most famous songs Crossfaith Omen (Cover Of The Prodigy) and "Wildfire", but, unfortunately, the band left, and admiring fans have some time, applauded and tried to return the team to the stage.

It is safe to say that Saint Petersburg has welcomed guests from Japan with open arms. Crossfaith is not the first time visits the Northern capital, and hopefully not the last.