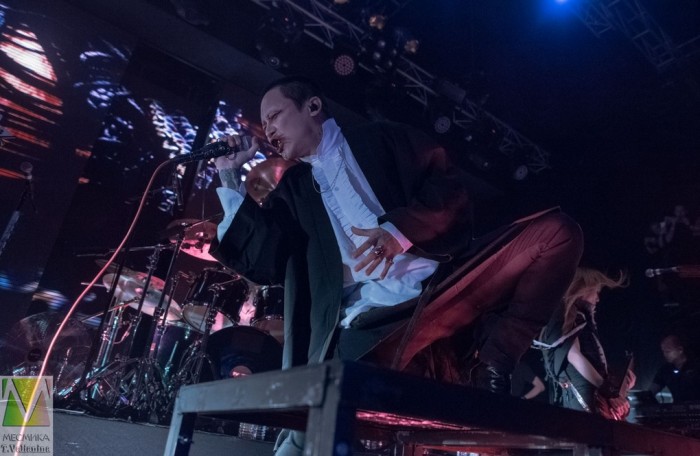 7 October in Moscow club RED Hall hosted a concert of the Japanese rock band DIR EN GREY. After 8 years, the musicians visited Russia with the presentation of the new album, "The Insulated World" and gave two concerts in St.-Petersburg and Moscow.

The group was founded in 1997 in Osaka. The style of execution varies from heavy metal to metalcore.

The origin of the name of the group is very curious: DIR with the German language translates as "you", EN – French preposition "in", GREY with English translates as "grey". In the end, DIR EN GREY translated as "you in grey". But there is also information that the special sense in the name, it's just beautiful and melodic sounds.

The lyrics reflect the violent reality in which mankind lives. Ke was never afraid to speak the truth, and now she put it in the lyrics of DIR EN GREY. Most viewers don't know Japanese, but the music and voice Kyo touches the heart and reaches the hearts of listeners. The song becomes clear without words.

The musicians appeared on the scene closer to 19.20. Viewers have waited too long for DIR EN GREY, so screamed, stomped and chanted "DIR EN GREY! DIR EN GREY!! DIR EN GREY!!!", and when patience was already on the limit, a musicians. They went out one by one, so each of them could feel all the love of the audience.

As in St.-Petersburg the concert was opened by the song Utafumi. Japanese energy metal immediately transmitted to each audience present on the site. DIR EN GREY played familiar songs and novelties, included in the disc, "The Insulated World". Ningen wo kaburu, Rinkaku, Phenomenon, Ranunculus... in Total, there were 17 songs, including THE FINAL, The Inferno and Rasetsukoku, which were performed for an encore.

The whole show is a frenzy of sound, light and energy, which were exchanged DIR EN GREY and their listeners. Musicians have always watched the reaction of the hall and peered into the faces.

The audience in Moscow is not indifferent to the performance of Ke during the execution of the Phenomenon – the moment when he started to pull out from under the shirt fake guts. It made a lasting impression on the audience.

When the club spread the first chords of the Ranunculus, the whole room was as one – emotion reached its climax, everyone listened to the song, and the faces filled with tears.

It was a memorable performance, bright and unusual. Listeners will long remember the cold autumn day and a hot concert. I hope that this is not our last meeting with DIR EN GREY.