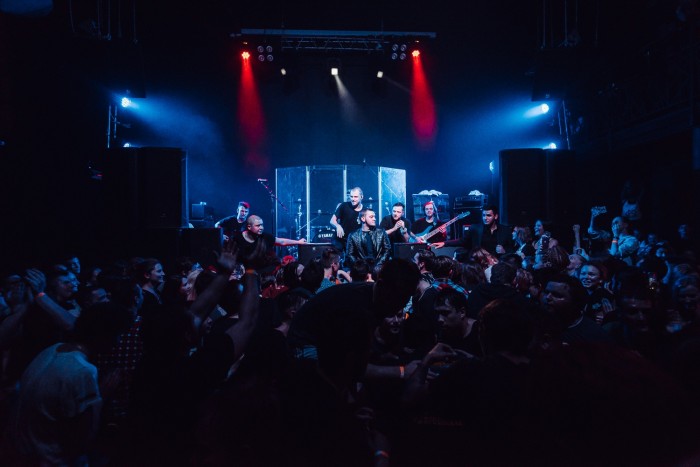 "I was sweating even," said Tom, defiantly odergivala gate t-shirt. It is difficult to find words when you have absolutely Topless man. But we will not break the timeline and start from the beginning.

Venue for the stars of this level is markedly low. However, the tightness did not bring discomfort, on the contrary, the more people Packed into the hall, the merrier and the hotter it was. A new "trick", especially for Yaroslavl of the audience, was audio screensaver a countdown of minutes (and later seconds) before the concert. While pleasant male voice counted "10, 9, 8, 7..." the entourage of the excitement and enthusiasm grew, after the last second on stage broke Artem and Sergey and made a huge blast.

The guys started though driving, but not from the new album played familiar songs "angel", "Rock star". After the group presented their new song, text and music which was already familiar to everyone; the fans sang along with and at the first notes learned that will be executed next. In General, throughout the concert, the musicians were miksoval songs mostly from his last two albums: "I'll never" and "marry me". The most memorable song was "Look at me". Before the chorus in the center of the room a young man stood on the shoulders of another is no less a young person. One this event is not surprising. Had a lot of options: possibly guys want to stretch the poster, or is this a new "feature" slam, and someone, maybe even the guys noticed. There was no outcry in the crowd, and after young man standing on top, pulled down his pants. This is no surprise. "Look at me, I'm standing naked in a window without curtains..." rang out from the speakers, just at the time when the audience appeared David (a marble statue by Michelangelo approx. author) in human guise. No one got to shoot it on the phone, difficult to find online at least one photo, it seemed that either all accepted what is happening as a regular thing, or was stunned so much that does not fully catch the essence of the performance. Responded only Artem. "I was sweating even," he said and announced the next song.

Anacondaz did not indulge fans with connections, but each of them was succinct and straight to the point. "Friends, don't do drugs and we'll be f*****s (very good)" - warned the boys before the song "Mama, I love you". Someone from the audience agreed: "OK. Will thump." Many campaigning groups in Yaroslavl recitals, mention local rock festival. One of the songs from the new album "Your new boyfriend" guys devoted to "Dobrofest". Hottest concert to its end has become a friendly meeting. Artem and Sergey, infectious smiles and joyful glint in his eyes Yaroslavl thank you for the warm welcome and promised never to forget.