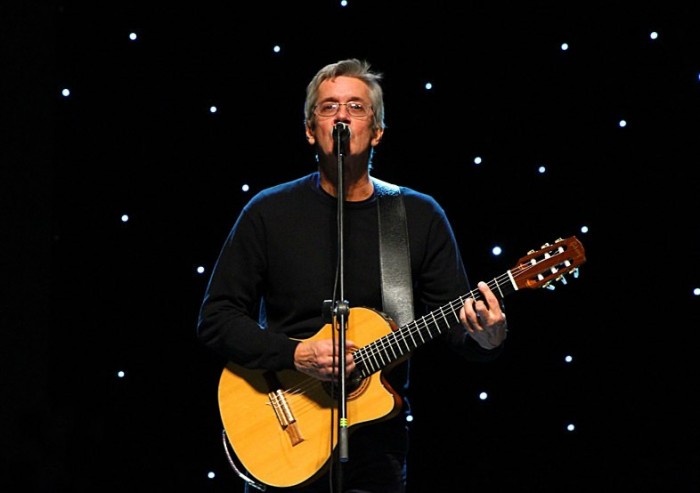 Konstantin Nikolsky is one of the few musicians who was accustomed to perceive as solo artists than as frontmen groups. Yes, most often his name is mentioned as the founder of “the Resurrection”, but still has long Nikolsky self-contained project. Concert in St.-Petersburg Konstantin made on 13 October in the “Concert hall at the Finland station”.

The venue for the event was chosen very precisely. It is not common for most rock artists club, but for chamber music Nicholas is and is not required. Enough spacious hall with excellent acoustics and Seating.

Constantine played a large part familiar to every repertoire. Here was “the Musician” and “my white Birds” and ”Night bird”,and, of course, “Breeze”. It was evident how excited the audience for these songs. They clearly waited for each of them, though intelligent, are not shouted from the audience, as is usually the case at concerts.

Many of the rooms together with her father played the daughter of Konstantin Nikolsky Julia. Female backing vocals are very organically fit into the usual perception, at least for the fans he is nothing new, Julia often speaks with his father.

It would not have requested the hits, but true connoisseurs of the musician is always waiting for more rare songs. For their discerning taste Konstantin had prepared a few songs from the early periods of art, when even the “Resurrection” was not in the project.

Very interesting, in this regard, and hear the varied approach of the author to the texts, music, perception of life circumstances. After all, everything around is somehow transferred from the artist to his works.

It's amazing how still comments from people music by Konstantin Nikolsky. It would seem that there is nothing sharp, but all the images that the author carries through his poetry, always open in new ways, they can be interpreted in different ways, to argue, to defend your view and agree that singularity of expression will always be in trend.

The inconvenience brought by the audience. Before the event was strictly warned - please do not make video and phototapes performances. Unfortunately, few were able to respond adequately to the request of organizers and in the hall here and there were lit lights of the phones. Had employees to come personally to each one and re-ask to turn off cell phones. If asked about this initially, loudly and purposefully, why once again to aggravate the situation? The desire to keep the memory material is understandable, but you should always remember that if you said that shooting is prohibited, for good reason.

The concert was warm, not academic, in spite of the place where it was organized. Konstantin Nikolsky still collects large halls, his songs are all also felt in the hearts of the audience, but the skill of the guitarist is only improving from year to year. At least it is worth a visit to his performances, really good musicians-guitarists in Russia now not so much.