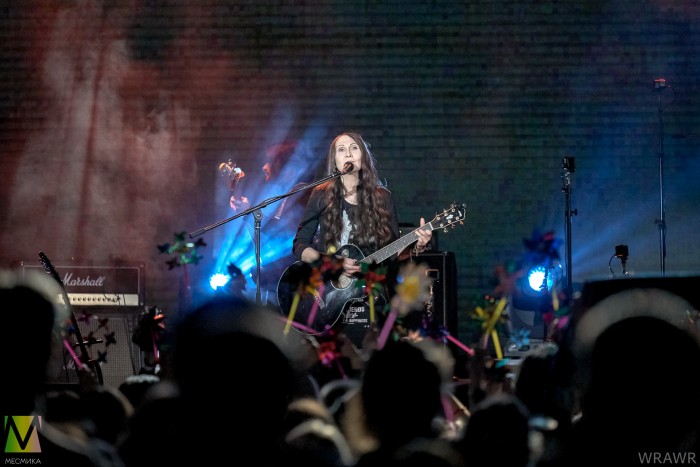 Performances by Elena - always music magic. Guitar, synthesizer, cello and flute all of these instruments create an enchanting music and works of Helen unites people with different musical tastes. Of course, her popularity and fame was the fact that earlier she was in the group of Fleur, but it's usually solo projects is the quality of the contractor. And here you can't go wrong - the project Elena was very, very interesting for the listener.

31 October took place the presentation of her album “weather dependent”. Despite the fact that the album was released in early autumn, Elena herself has said “spring” the mood of the album. In particular because “the songs have the energy of growth, breaking through stony ground”.

To feel that energy it's really a lot of people. Perhaps the birthday Elena also served for many of her fans incentive to get out mid-week in the Leninsky Prospekt area, so the event was truly extraordinary.

As always I want to say thanks to the organizers for maintaining the status of “One of the best clubs of Moscow” - polite security, quick but careful inspection, the straps instead of boring number plates in the wardrobe of the club changed many names still holds the trademark and concerts there are many cozy and homely atmosphere.

Album name Elena voynarovsky “weather dependent” speaks for itself. The concert featured such songs with him like “Cold front”, “Gulfstream”, which it is certainly not about the atmospheric phenomena and trends. And the song “cloudy” seemed especially warm was adopted by fans of the band - at some point the room was filled with hundreds of paper fans is a great flash mob!

No cost on the statement and without such songs as “Come with me to sing in the transitions” and “Tell me about your disaster,” familiar to listeners over the period of the group Fleur. Without songs of this band, the concert would have lost part of its charm: “lullaby for the sun”, “For someone who managed to believe,” “Russian roulette,” was still very subtly and organically.

Also worth noting is the high-quality visuals, good equipment GlavClub allows to implement a variety of wishes of the performing group. Elena has chosen for his concert cold tone that perfectly complements the charming music.

Here it was the last day of October for all fans of high-quality and just beautiful music. Congratulations to Elena, happy birthday and wish her creative development and still not a single presentation in Moscow!