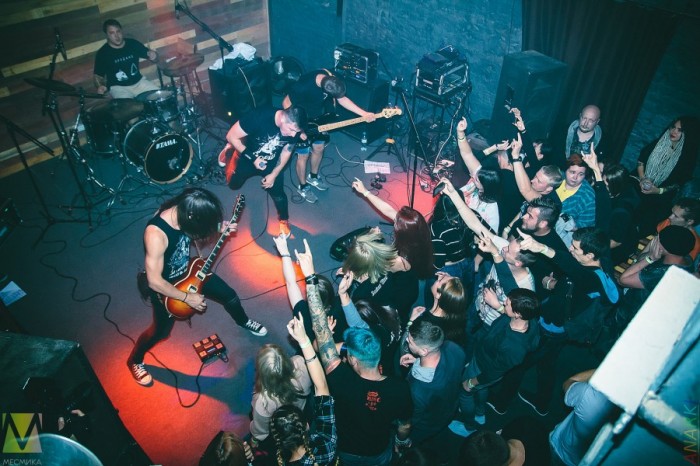 ”All punks go to heaven, my friend. I'm walking away”.

A special place in heaven prepared for the punks, not refusing the execution of not only the usual rabid energy of concerts but also more intimate acoustics.

December 1 in St. Petersburg, the authors of this quote, group Eorsi, gave an acoustic concert at the club Action.

Dima Sokol, leader Eorsi, not for the first time was with a similar program in St. Petersburg. Already performed a “pen test” is now closed the Art-salon “Nevsky, 24” about a year ago. Then it was too homey, rather, it was the jam session.

This time the performance came much more thoroughly. Yes, the arrangements of songs were very unique, however, restrain my energy, the musicians are not too hurried.

Yes, the musicians, the audience, most of whom were very young, did not long stand, and almost immediately organized a slam. Slam! The acoustics! Not every group will boast such episodes.

Almost before each song Dima spoke. No, it wasn't a Declaration from the podium, though sometimes quite touching. Not pretentious. Resist.

The setlist I picked up the “Men with electric guitars”, “Indifference=complicity”, “Sid and Nancy”, “punk”.

Played cover even on the “Letter” Decla. As said the leader of the group: “His ideology is largely the same as ours.” Apparently, unlike modern rappers, which Sokol spoke very disparagingly.

In one very famous songs singer confessed to borrowing melodies from Circle. Who can guess the unexpected rebus, so what?

Was disco. There was a flash mob “As the punks of Podolsk wrote the first hits sitting on the courts of the garages”. And many lovely solos from the guitarists of the group.

Have Eorsi has at least a few songs about which we can say - this is exactly important thanks to the author huge. “Indifference=complicity” reveals one of the major problems hidden in concrete boxes men. Now they added “BTSKH”. The irony and the absolute accuracy of the images and expressions to gather in one text manage very few people, but Dima Falcon managed.

Punks like you for filing. For sincerity, for conviction, for energy. Format acoustic performances hides part of their power. You need to have good artistic experience even in the main hall to play in a way to convey all your emotions. The audience did not forget - hell, they left it with a punk concert!