Christmas concert of the folk group Otava Yo 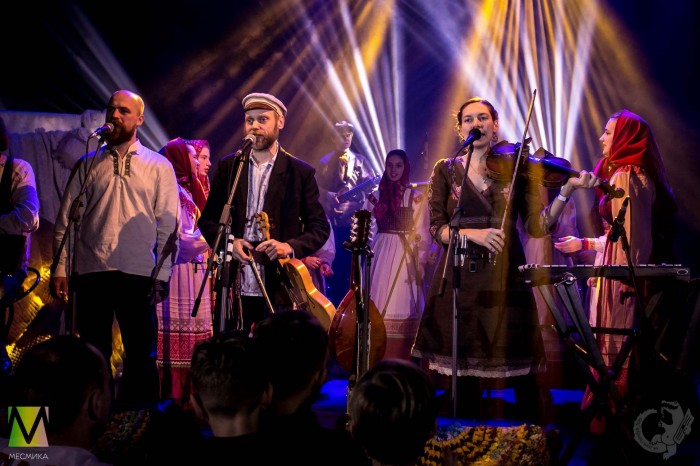 13 Jan "Opera Concert Club" was a traditional family Christmas concert of the folk band "Otava." The concert was truly a family, and children feel at home and even sat on the stage, it is not disturbing to the musicians. Noted children's special atmosphere and the group leader Alexey Belkin: "I think the club "Opera" I have never seen so many children. The bartenders will not lie. Children suit, order juice, ask: "Where is the limit?".

Traditionally, "aftermath E" sang Christmas carols. This time they helped the vocalist Pavel Mamaev and folklore ensemble "Vasilisa" (Pushkin). Young beauty in bright sundresses sang folk songs and carols and performed traditional dances. Sounded at the concert, and the legendary hits of "What songs", "Janitor" and "About Ivan Groove". To the accompaniment of the last song actors of the theater "Peugeot" performed a funny dance that came up with...drummer Peter Sergeev!

Part street theatre masks "Wandering dolls of mister Pezho" was a special highlight of the concert. Young then had thrown pillows and balls with the audience, and then presented them with candy. In the words of Alexey Belkin, so they "kulagowski Vice versa." Usually because the audience is paying musicians for songs candy. But in the future the musicians warned to expect from carolers candy: "If you ever come kulagowski, do not expect that they will bring you candy. Prepare them yourself...And then they get something to take!"

The versatility of the musicians is striking, because the musicians own the game on the countless number of musical instruments! "Aftermath E" you could hear: harp, violin, bass guitar, mandolin, xylophone, fiddle, bagpipe, Hornpipe, kalyuk, kugikly, rebec and percussion instruments. It is not surprising that a group so popular and the concert was really amazing!

In the walls of the club at some point became so crowded that Alexey Belkin was scared for the safety of the building and suggested that a little bit more and it will be possible to find out what was behind the wall. And for the building Alex was really concerned, after all, known him for a long time. Today it's hard to believe, but 20 years ago, he worked as an accountant and handed over a report here in a medical facility.