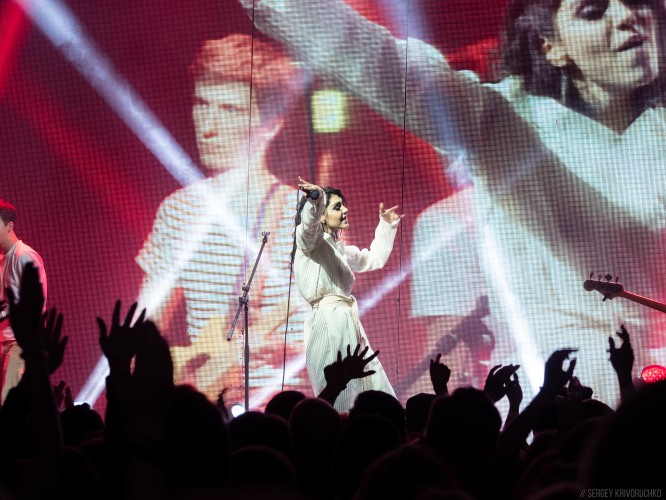 Real made the indie band "aloe Vera" February 2, in honor of the birthday of its founder, songwriter and vocalist, Faith Musayelyan.

Your 31st birthday she said brightly, musically and with panache. In a favorite of many listeners of the song "Easier" is repeated several times the phrase "We do what we like." Indeed, musicians and fans were free to do what they wanted. By an honest vote in social networks, "aloe Vera" was chosen the songs that will be performed at the concert, the place and date of the event.

As one of the key values of a free man, which according to the Faith Musayelyan, is everyone who loves music to be able to dance at any time in any place; the organisers made sure that it was not paranapanema hall. Dance, actually, could everyone who came into the day in the Red.

Great Faith came on stage in a beautiful cream dress. Her face was decorated with rhinestones. His eyes burned. It is difficult to say who was more happy to see each other - the faith of the people in the hall or on the contrary, they have it. But you can definitely say that the holiday was a success.

Here are some of the things that could make happy the guests of the concert:

1. Get to napryagatsya the fiery song "aloe Vera" about the sea, men, captains, cheesecake and absurdity.

2. To attend one of the final concerts in the club "Red" before closing the "red October", which houses a music venue.

3. To remove the shackles of office life and nortica.

4. Beautiful shoot at the ceiling at the same time from 200 crackers.

5. To drink wine from bottles that the scene was distributed to the artists in honor of the birthday of the singer.

6. After the concert, to find confetti in the most unexpected items of their own clothing.

7. Become part of a single organism, consisting of a group of like-minded people, inspired by the music and lyrics of the band, and combined the idea of freedom and love of life.

Concerts aloe Vera - is not just about concerts, it is a conceptual event, made for people, to ensure that all was well and everybody was happy... Unless they themselves choose to be happy.