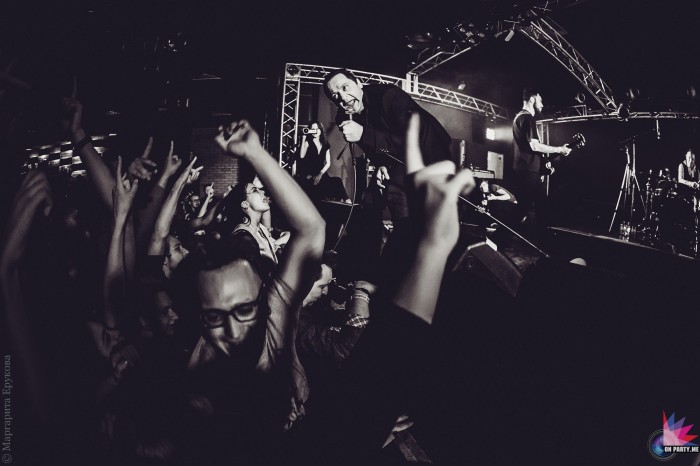 14 and 15 February, the Last Tanks in Paris, played two concerts at St. Petersburg club Zoccolo 2.0. These days, the musicians remembered their albums over the years. On the second day the audience was presented the “Mirror” Order of things”, “the keys to all the doors.”

The authors of the two-day marathon split it in two parts, red and black. Second day was dedicated to the “black” tint. Although, as noted during a speech the leader of the team Lech Nikonov “In the black spectrum has all colours”.

The event starts traditionally PTIT delayed for an hour. And when Alex appeared on stage before? Fans know it, but because most people came from eight to nine in the evening. By the time the musicians, in a hall the Apple had no place to fall. And in this situation the audience is still and slam managed to arrange.

And slam and stagediving did not abate until the very end. It is traditional for the speeches Nikonov. In the “Basement”, however, the jumpers from the scene immediately tried to rein in security. On a tiny stage and musicians with not a lot of places, so better left to happy punks alone.

Jumped on hands myself Leh. Interesting: this musician, one of the last representatives of traditional punk music in Russia (if punk at all possible to apply such a definition) combines the austerity and restraint of the images, higher intelligence, and quite foolish and reckless behavior and lifestyle. We can say that it was from him, a wave of modern intellectual and meaningful punk rock.

Not just Nikonov from the stage called “Peter dance”. And Peter danced. Like last time, giving the impression that the “Cap” one of the most underground of venues, seen a lot, nothing.

Peak universal rampage came on the song “My revolution”. The tension peaked, and the last shackles of norms of behavior broke from those who held themselves in the framework of the whole concert. Such an atmosphere is to feel for the sake of her want to go to concerts PTP again and again.

Of course, Lech Nikonov, one of the best contemporary poets. However, it is impossible to perceive the work of the Last Tanks in Paris just poetry. It must feel to come to the shows, catching the energy to choke in the crowd, jump in the slam (or even want it). Looking at the scene, catch the views, to give back his emotions. The only way, personally, can be the end to feel and understand what is not explained with words. Punk the live music.

And even worse the organization of the closet, like any technical point, secondary. Or lousy sound. Details like this can draw attention if the concert failed. And after the show PTP most left too many positive experiences to send their details.

The excellent tradition of the two-day concerts. It remains to wait for the new album. Then, perhaps, will have full-fledged festival?