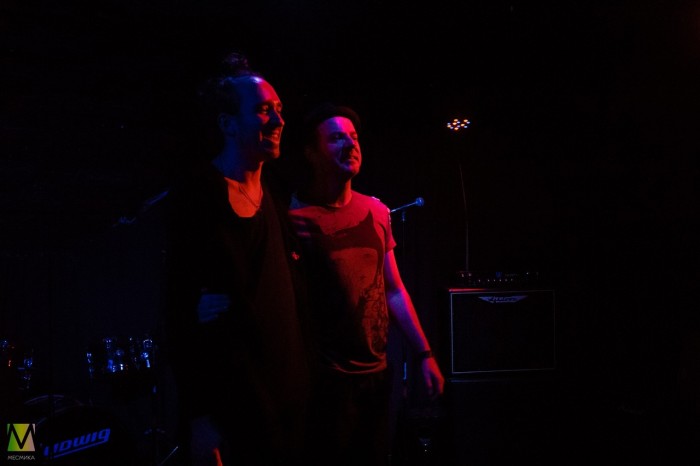 February 22 for the first time in Tambov club MolotoV made Zero People presentation of the new album "Beauty". This project was created by musicians notorious rock band Animal Jazz: Alexander Krasovitsky (vocals) and Alexander by Zarankin (keys). All songs performed in the framework of this side-project, very personal and in many ways are stories from the lives of artists.

We had quite a lot of people – the club was nearly full. The most devoted fans of the project offered a variety of merchandise: t-shirts, CDs with a new album, magnets and stickers. The most popular item was the last from the list. We can assume that far more than one phone or the laptop fans are now decorated with a sticker with the letter Z.

The concert itself really surprised me with its atmosphere. At first, she seemed rather gloomy. First, the musicians began the concert with the song "Beast" from the new album. I must say that, in my opinion, this is one of the heaviest songs of the band. In addition, the black brick walls and almost complete darkness also burdened the performance. However, the next song of the current gloom began to dissipate. It was replaced by a very lyrical and intimate atmosphere. The melody played by Alexander Zarankin, penetrated into the soul, and combined with the simply gorgeous vocals of Alexander krasovskogo forced to listen to every word, every note.

Probably because there are so talented performance most of the audience just enjoyed, not daring to drown the music. But some songs still forced fans to sing along. These were "the Wall", "Craft", "Crazy" and "Player". But the song "time to tell", performed by actors for an encore, actually became a real challenge for fans who know every chord. The vocalist was constantly joined at different times, stretching the tune, what's everyone singing along does not fall on the beat.

The soloist of Zero People about life

Almost before each song Alexander Krasovitsky told us that pushed for its creation. It was and individual life stories, and just stories. I do not think I noticed that the musician is very eloquent. Alexander talked about simple things, about what happened with each, but somehow in their own way. It's pretty rare, but listening to the stories were no less interesting than the songs.

Concert Zero People in Tambov did not leave anyone indifferent spectator. I think it is this "simple" music – a kind of rock poetry makes people listen to not to miss anything. The artists managed to hurt the feelings of the audience, for which they were grateful and will be eagerly waiting for the next performance of the group.