Concert of Picnic in Tambov 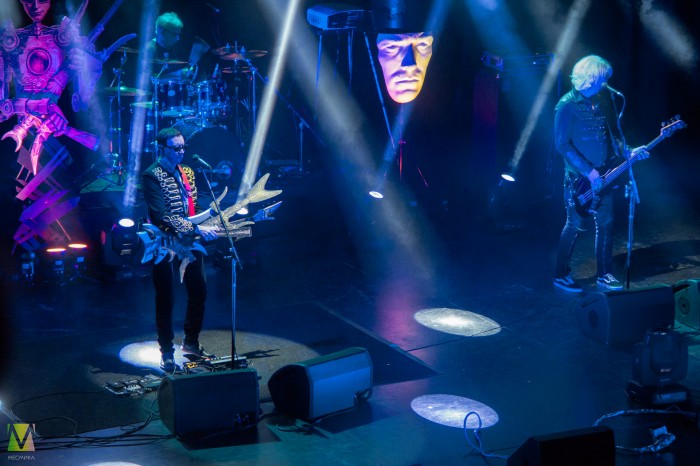 28 February in Tambov drama theatre group "picnic" was presented with his new concert program "Levitation". "Picnics" is not the first year pleases the fans of their music. For 41 years the group has been able to find their sound, their audience, however still continues to experiment. One of these experiments and was a program of "Levitation". Songs are performed by Edmund shklyarskiy (singer, multi-instrumentalist), Leonid Kirnos (drums), Marat Korchemny (bass guitar, backing vocals), Stanislav Szklarska (keyboards). The group supported this team the last 10 years.

Picnic: songs and not only

The concert consisted of two parts. In the first part of the artists performed "theatre of the absurd", "banks", "Dainty and fragile" and others. The second part was mainly filled with favorite every fan of the band compositions: "the shaman three hands", "Egyptian", "Purple-black" - and this is not all on the list.

We would like to mention the scenery which was created specially for this program: cardboard figures in full growth, a huge white mask with the black hat... by the Way, the hat was part of the show. The actor launched her to the ceiling, and it flew!

An equally important part of the show was the lighting. From the first songs it became clear why a group concert "picnic" was held in drama theatre - level lighting in Tambov would compare to no other concert venue.

Each song was selected for a unique video or photo series. During the performance of certain compositions on the stage appeared the main character, is also depicted in the video. The actors played their roles. Such theatrical inserts was interesting to watch, because the music seemed even stronger, the audience could not only hear her but also see to fully experience. These concerts are remembered for a long time.

The unusual style of the band and scenery, exotic musical instruments, excellent lighting have helped to create an atmosphere that contributed to such a perception of interesting music. The concert will remain in the memory of fans for a very long time.

Fans actively supported the musicians. Some of the songs the audience sang along, was a beautiful echo. After each song sounded loud applause from the appreciative audience. In the finals of the concert artists presented flowers. The audience went home with a great mood.