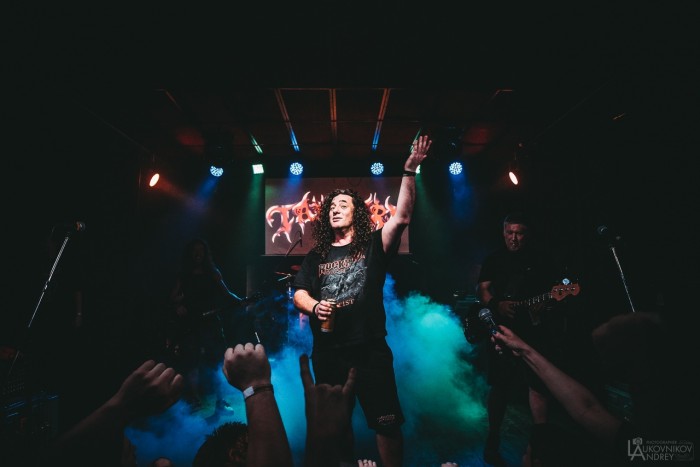 German band Tankard needs no introduction for the real fans of heavy music, fans and especially Thrash Metal. The team, predicated on technical and hard sounding, is part of the so-called big four European thrash metal along with bands such as Kreator, Destruction and Sodom. The main theme of creativity is the alcohol, and the band members themselves have mentioned many times that they are not professional musicians and are working at normal operation (at present the vocalist Andreas Jeremiah in the office is simply impossible).

Tankard returned to Russia after five long years of waiting, promising to please fans of not only the classic hits and songs from their latest album One Foot in the Grave (2017).

Despite it being a weekday, the club Mod barely has contained in itself all fans of beer metal.
The evening was opened by the thrashers from Israel Sinnery. In the asset guys one full-length album, almost entirely made live. High quality sound and energetic performance is perfectly combined with the mood of the public, and although the majority of the participants were familiar with the work of the group more than superficially, with the task of warming up they did.

Kings of beer not long to wait, starting the speech of the same name with new album track One Foot in the Grave. In the hall immediately began to slam, and appeared on the scene stagediver. The Morning After Rules for Fools - classic old-school thrash, very powerful and biting. It was clear that algotrader really like to be on stage. Guerra fun doused the front rows with beer, and bassist Frank Thorwarth and guitarist Andy Gutiar constantly transmitted to the hall closed banks. Despite the large number of stagedivers, they almost do not interfere with the group, some even managed to take part in the concert as backing vocalists. Time-tested fighters, dedicated to go with beer, Die with a Beer in Your Hand and R. I. B. ( Rest in Beer) led the audience in raptures, and downhole riffs and driving rhythm section of drummer Olaf Sissela did not give bored any one person in the room. Guerra, despite assurances that he is already very old and quite "babushka", ran around the stage and constantly in contact with the fans.
For an encore, of course, left the best - A Girl Called Cervezza, Alien and (Empty) Tankard. A great way to end a wonderful concert! Almost from the scene Tankard descended in the hall, and no one went away without the coveted autograph or photo. By the way, as a technician with the group came drummer for Holy Moses Gerd Lucking, which many were pleased to see.

Most German artists of heavy music are known for their simplicity in communicating with fans, but Tankard has bypassed even the way colleagues. Invite a few fans to join them for a drink - easy! Waltz on stage with a girl from the audience - always welcome! Pour beer the whole club and a few dozen people - na zdarovje!
Despite the monotony of the style itself, two hours of the best fighters Tankard not tired, but rather, left a slight feeling of incompleteness. Although classic thrash and over the years has resulted fat and ugly, but he's still alive.