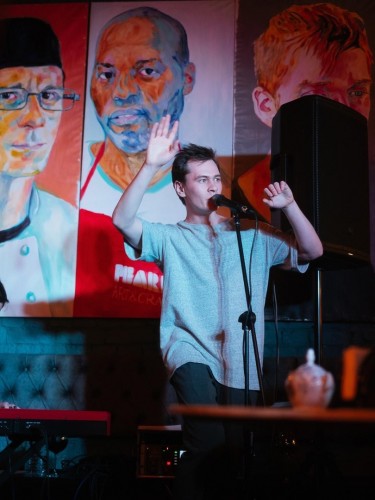 Exclusive - because Oh, how rarely this team plays in acoustics, and even in the lamp-chamber atmosphere. The proximity of the stage to the auditorium gave a sense of common belonging.

The artists had a lot of conversations with those who came to the concert, and then asking how they're doing, and diluting the pause between songs banter.

It is impossible not to pay attention to the guests of the evening. Many of the audience contrary to stereotypes, attitude to St. Valentine's day is really like for the holiday, wearing your best suits, dresses and decorations. Among the attendees was some very famous guests: mark Tishman, the participant of television show and an active touring singer of today; Julia Melnikova, music producer and co-author of not so long ago released on all platforms of the composition, performed Omegav "lighthouse", which was also shot the same clip, took a table in the front row and then standing up from their seats to sing and dance along with the guys.

In the middle of the night the keyboardist, Yaroslav Timofeev, approached standing at the other end of the hall classical piano performing one of his old songs. It was all of a sudden.

Where is it all happening? - you will ask. Not so long ago opened at the Mendeleev art-bar in addition to the conflagration of the atmosphere, surprised those who first got there huge paintings on the wall, a refined cuisine and a wide selection of drinks.

In conclusion, I want to add that if you haven't been to a concert of Omegav, look and listen to them better. Indie that is not afraid of being Russian, and having all the musical direction presented in our homeland, to a new level. Modesty and tact of all participants in the trio in contrast to the extraordinary texts, which always have a fair share of provocation, and not only "on leaves-flowers". It is OQJAV.