Hollywood Undead made in St. Petersburg with a solo concert 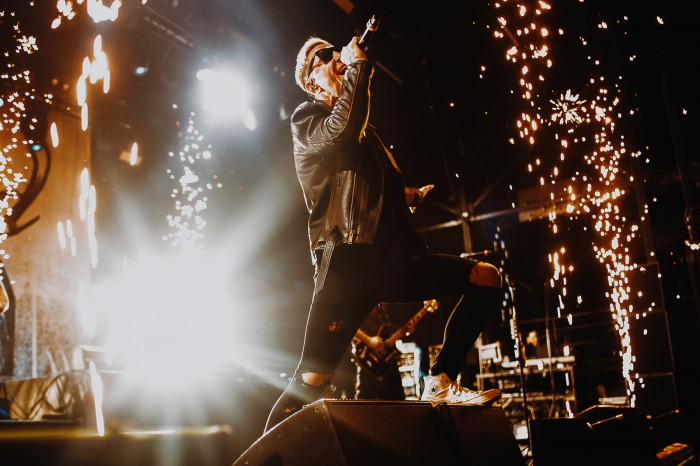 American rapcore group Hollywood Undead will give a concert in St. Petersburg, opening the European tour Russian capitals. On 12 April they were taken to Moscow, and 13 to the A2 club in St. Petersburg.

Downloads Hollywood Undead became clear to even the most ignorant man in the street on the approach to the club. The queue for the concert stretched on the visible part of the Petrograd side and went beyond the horizon of vision. When everyone still got to the club, it became clear that if the group and not to get sold-out quite a bit. The hall was full.

As the crowd slowly gathered, the gig made an alternative command for JACK ACTION. They are not used to sharing the stage with top international stars. Over shoulder joint appearances with Muse, Linkin Park, Metallica, Incubus, Fun Lovin' Criminals, Guano Apes, Three Days Grace. It is evident that the musicians have gained experience in managing large sites and know how of thousands of fans. Of course, we could say that ACTION JACK is quite famous in St. Petersburg, the team, and they are not stressed during a speech in St. Petersburg they are always received with great enthusiasm.

JACK ACTION “warmed” the audience for about forty minutes, fulfilling, unexpected, and new songs. Although in such situations I usually try to include in the setlist most vivid hits.

With quite a long delay already in the tenth o'clock in the evening themselves out Hollywood Undead. Now the musicians ceased to concerts to put on masks that initially was part of their image. However, people in the corporate masks can be found among the audience got such prepared. It does not affect the reception of the Russian fans, and the artists themselves were laid and musically, and building on the scene bright and energetic show.

In General, the unprepared viewer might seem that HU every song an absolute hit. Our fans with such a roar greeted every track, as if you had come here to hear it. And so each of the eighteen songs.

Hollywood Undead playing at the intersection of rap and rock music, so the audience at their concerts is the variety. From young students-fans of rap, to adults prozhennye metal. Members of the group sing certain verses in tracks, although the claim that each group member takes their own role in the song. In any case, the presence of a variety on the supply of musicians and the lack of clearly defined frontman, is good for the audience and the band, allowing them to assess a variety of shades of creativity.

True places are not only those who wanted to see a Los Angeles team. Two young men, Kostya and Dima, too, apparently,the future star came out and played together with their idols.

The setlist included such songs as: Whatever it takes, Undead, Been to Hell, Gravity, War Child, Riot, Bad moon, Levitate, Hear me now and others.

Under the end of the show the audience and the musicians dispersed all more. Almost everyone on the dance floor was jumping to the rhythm of playing tracks that few people stood and calmly looked at what is happening.

So bright and enchanting concert of American raptorstv. I want to believe that and for them, the European tour began with positive impressions of Russia and they took the fire of love of the audience and a desire to return. And not just “thank you”, knowledge of which in the Russian language boasted during a speech in musicians.