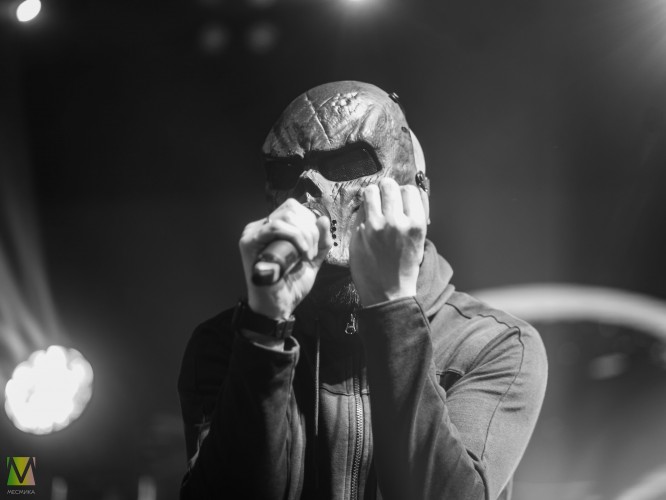 24 may have done what we expected for a long time. PNEUMOSLON after almost a year of silence were back on the big stage! Again, a group of people dressed in black returned to the club the Astronaut to represent the new album, "counter-evolution - part 2", and also to sing the song that became legendary in some circles. Hereinafter, the emotions and the experience of visiting this show.

During the year the group has seen some changes. Boris Butkeev from Krasnodar left the band, to develop his new project and his place was taken by vocalist Asya. Now a song about pants with Ali-Express performs live vocals, not the female record. There have been few changes in the team, there was a bass player. The grandmother remained, but became seem even brighter and more dynamic (or we are just unaccustomed to it, because the last time she appeared on the eye Musmeci in December at a concert of Pyromania Theophanes at the club A2).

The scene has also changed. The rays of light before the concert was depicted in the famous Russian word, and on the stage stood a barrel, which imitated the fire, which in the beginning of the show warming up PNEUMOCOLON.

The music became even more social. This time from the all-seeing eye of PNEUMOLOGY are unable to leave pensioners (the song "Incredible smell"), uninvited guests (the song "Finito La Commedia"), former lovers (the song "In g***e, g****m g***o"), employees of the cultural sphere (the song "Workers of culture", probably a special song for the concert industry in our country - approx. the author) and others.

Category concert, still is 18+. The show was two hours, and the track listing consisted of more than 30 songs (basically, the track-list is 28 songs). From the first song hall wound up, because the beginning was very bright, and the leader and Creator of PNEUMOLOGY having extensive experience in working with the public in "Theophan" did everything possible to ensure that people will be interested in. Was interactive, there was dancing, was a circle pit on the song "Much is possible", and fireworks were lit on the songs "Striking hand", "Waving [the sexual organs] in the alcohol pit" and "Peter, shizi on a curve" (but on the latter song below).

In the middle of the concert after 15 tracks, the group departed, leaving on the stage the singer. The Lord said that not all the songs, unfortunately, fit the format "Pneumocolon", but forget them too badly, and sang 3 songs like that in St. Petersburg they were the "Cracks" (song about love and domestic flour), "Uranium rock" (a song about the relationship between supervisor and subordinate, and also about determination in the desire of achieving the goal") and "domestic Violence" (the title explains what the song is).

The concert continues, the songs go one by one. New singer elegant accompaniment to the Lord. The songs "Princess shorts aliexpress" and liricheskaya "In g***e, g****m g***o".

After the last song of the main track-list "the plant G***forty" Lord invites to the stage the participants singing wing Zenith to sing the song "Peter, shizi at the bend". At this concert she is special because of the football club Zenit came in the Champions League, and a special celebration for Peter.

The concert ended and once again began working life, but do not worry, because now the Lord said that the next show will be in September, and secretly hinted that he will act on the INVASION.

Could we meet with the image in the mask again.

Team MUSMECI belgodere the Creator of the project PNEUMOSLON - Oleg for his terrific songs and the opportunity the team MESMIKA see this concert. The report is available here.