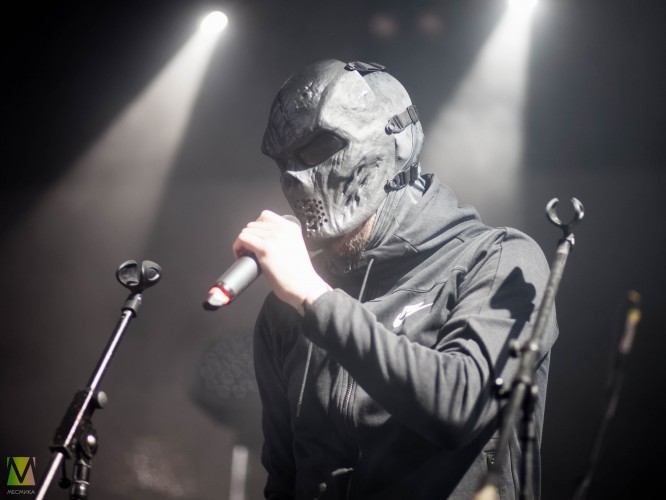 On may 24, Moscow hosted a concert of “dear sir” known in narrow circles as PNEUMOCOLON. Although, circles, turns out that you know this character is much wider - Metropolitan STATION HALL announced SoldOut a couple of days before the concert. On the presentation of the new album, “counter-evolution part 2”, read on.

PNEUMOCOLON. If you haven't heard about this project, it's strange. As at the time Narimono Theophanes brought something unprecedented on the Russian stage, and is now a fascinating PNEUMOCOLON only one name. For those who do not know is the mention of two of these projects next not by chance: still unsolved and mysterious Narimono Theophanes year ago founded a side project PNEUMOCOLON, which again participates in the main role as Lord Pneumocolon. It is worth to mention that the alias Lord Pneumocolon much older and appeared for the first time already 10 years ago. As he said himself, the founder of the project, Neuronano Theophanes is the immersion in an artificially created reality of Russian drum'n'bass. PNEUMOCOLON is different. For songs with a wild and someone is cutting the ear names are hidden stories about people and about people. And if some groups are looking for new metaphors and meanings more complicated, PNEUMOCOLON can easily record a song about shit, just because “why not record a song about shit?”

And again, if Narimono Theophanes is completely fictional personality, Pneumology any myths around it are not needed, they just sing songs. Yes, with the abundance of Mat. Yes with a strange sense at first glance. But scored jam STATION HALL is the best example of the fact that not one Russian rock music live domestic scene.

The concert itself was more than fire. The first two songs - “*bash” and “p*ZDU” set the desired level of Kacha and madness. Actually, it was just more. Lord Pneumocolon calls her concerts are therapeutic, let people come to yell, to vent emotions and to be cleansed in a sense. So it's safe to say that a large number of psychotherapists simply will not work if PNEUMOCOLON will continue to walk throughout the country.

The audience was presented virtually the entire new album, which is no less Avtovo (in a good way) in person than in writing: “Heroes FSUs*ISM”, “Finita La Commedia”, “cultural Workers”, “Withered” and other songs from the new album went perfectly.

Not without more of his early work, in the middle of the concert, the musicians left the stage leaving only Lord Pneumology, who performed three of his old track in the disco style: “Ex”, “domestic Violence”, “Uranium rock”. After returning, the group continued the madness on the court. “And when I Sinii”, “Catastrophic p*zdets”, “fuck” and of course “Waving x*s in the alcoholic pit.”

Throughout the concert, the founder of the project actively communicated with the public and never tired of thanking those who came for support. The group plan is not as much in the stadium and the competition of Leningrad. Let's see whether PNEUMOCOLON to collect more area in September, then it will be the next concert in Moscow.

But the fact that the group has become a phenomenon is a fact.