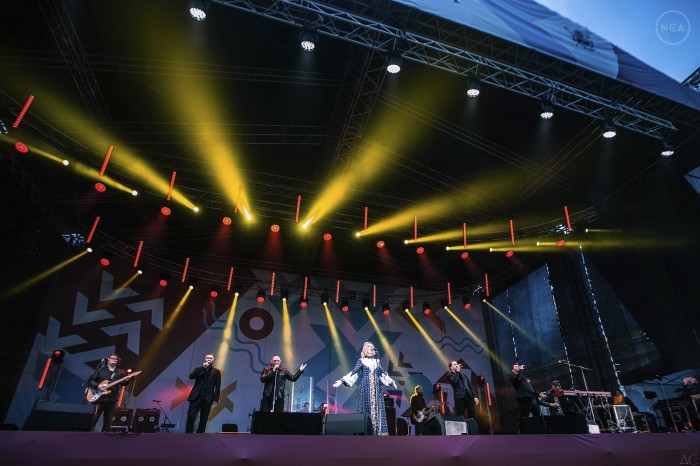 Notice: Undefined index: wrap_width in /myarea/web/mesmika/public_html/templates/boxed/content/default_item.tpl.php on line 49
>
Photo source:
The press center of the organizer

July 13, at the Palace square was held a big city festival "Petersburg live". A Grand musical event that has become a source of pride for residents of the Northern capital and enthusiasm for guests from other cities and countries.

Festival "Petersburg live" re-bundled music enthusiasts under the open sky in the heart of the Northern capital! A four-hour festival brought together famous singers of the country. The headliner of the festival was the universal favourite — Pelagia. Together with the singer in this day, on Palace square made by the brightest bands: Zdob si Zdub, Zventa Sventana, Marina Kapuro, "After 11" and "IVA Nova".

The audience saw a wonderful show, which worked with a team of the best specialists of Saint-Petersburg. At the Palace square was erected a 50-meter stage and a specially installed screens not only provided full visibility of what is happening on the stage for each, but did the musicians closer to the audience.

The host of the festival "St. Petersburg live" was Alexander Malich, who supported the wonderful atmosphere of the event, and charged the audience with energy throughout the evening. Opened the festival the group "IVA Nova", instantly dazzles the audience with a mix of Slavic motifs and head rock, dance techno rhythms and unusual sound effects. This magical energy caught the polyphonic singing of the "After 11", Marina Kapuro "crystal" voice, Zventa Sventana who creates music at the junction of rock and indie-pop. And the band Zdob si Zdub, added drive rock guitars and fiery Balkan bit.

The gem of the summer evening was Pelageya – the famous Russian singer with a unique voice, without which it is difficult to imagine the modern music scene. Each song Pelagia has caused an incredible storm of applause of the guests the Palace square. It seemed that people became one with the music, which is native and its. Pelageya admitted from the stage, so don't want this to end, and the feeling was close to everyone.

The audience of "Petersburg live" did not hide his joy and his most sincere emotions, giving them not only all gathered in the Palace square, but also to your friends and family on social networks.

Had a wonderful evening at the Palace! The dream came true: I saw live magic pelage and driving Zdob si Zdub. Petersburg is the best city with the best festivals. Thank you all! And positive emotions will last until the next festival Petersburg live.

Came with the family to listen Pelageya, Zdob si Zdub and Zventa Sventana. She danced herself newlabels. The sea of emotions! And what incredible After 11 and IVA Nova!! We are now the whole family will listen to these songs and reminisce about the wonderful evening. As well, in city there are festivals and free!!

Festival "Petersburg live" was held with support of Committee for culture of St. Petersburg and attracted this amazing day on the Palace area of more than 20,000 people. The festival just passed, and we are already looking forward to it next year.