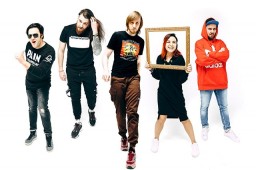 The group "Operation Plasticine" has come a long way in his musical formation, combining unprecedented melody and plenty of interesting instrumental.

Style in which plays "Operation Plasticine" can not be characterized unambiguously. The band's music is quite eclectic. It assembled a cocktail of rock, punk, reggae, ska, poetry, new wave. Flavored with the lyrics, take away the quotes, and left to conquer the musical Olympus and simply a Listener.

Changes in the composition of the team and in the musical component at the end of 2017, has allowed the group to enter into a whole new level of creativity.

Currently the team is developing at an unbelievable pace over the last couple of years releasing 2 powerful album titled "Hungry and angry" (2018) and "Rave" (2019), collecting the biggest clubs in Europe – Adrenaline Stadium, increasing the quality of the material and earning the recognition not only of a greatly increased audience, but also colleagues, as well as major participants of the music market.