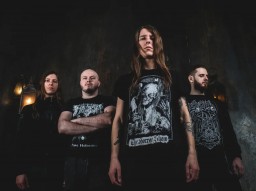 Second To Sun - the project of Saint-Petersburg is created by Vladimir Lehtinen, later enlarged to a full composition and live performances. The main sources of musical inspiration Second To Sun is a Scandinavian black metal and the legacy of the American team Pantera. The songs are performed in Russian, the main topics are mysticism, mythology and historical events. The band recently released a new album called "Legacy".