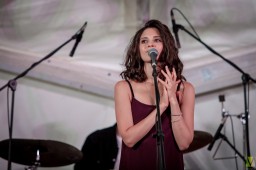 St. Petersburg singer Zhenya Lubich is often called a "Russian Frenchwoman". In Russia it was glorified, arriving from France in 2009, then about a Wife already knew about the Nouvelle Vague. With them she managed to overtake a lot of countries and conquer many prestigious venues, including the Paris "Olympia". A new phase of life Zhenya Lubich began at home where this refined girl with whom to compare - it exists in its own universe, her work is not subject to the boundaries of "format".

Jack is the author of over three hundred songs in Russian, English and French, some of which are released on albums and EP. A favorite worldwide, the track "Russian Girl" became a hallmark of singer and international hit. This song was later given the title of the first vinyl record Zhenya Lubich.

Many of the songs Genis steel sound tracks to popular films and television series: "Yolki 3", "Gentlemen, good Luck!", "He Dragon", "Crisis tender age" "Bone" and "Not be together". Special response song written specifically for a film, "He's a Dragon": "Ritual", "lullaby of white clouds" and "lullabies of Silence". The latter was the theme of the love of the main characters of the film and received a great response in the media.

The singer's popularity is growing every day. Confirmation of this-the radio and telephoto, participation in joint projects with internationally recognized artists, as well as concerts that take place in Russia and abroad.