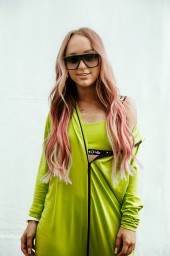 Few years existing solely in the Internet space, in the 2017th artist sounded in the air of the Federal radio and television stations and now confidently proves on the big stage!

Three years ago when she just started it, no one believed. Said she will not achieve anything! The author and performer of own songs, she did not cooperate with any production center, although the proposals did constantly: "what I offered, completely went counter to my ideas of the perfect Union "artist-producer" to too many restrictions."

Literally on their own releasing the album “because the NNPC (there is No One better than Us),” on the young singer barrage proposals. No wonder the album immediately entered the top 10 on iTunes, and the song "love me drunk", "Call a taxi", "Go forever" suddenly taken away on citations users of social networks. It became obvious that this singer people have been waiting for!

At the same time, Marie realized without a team, they can't do.