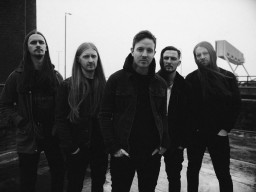 Bleed From Within is a metal band from Hamilton, Scotland. The band was formed in 2005 and quickly came up with a name for themselves on the local scene, playing on tour with such bands as Job For a Cowboy,The Black Dahlia Murder, I Killed The Prom Queen and Suffocation.

The group went into the Studio for the first time in November 2005 to record their first EP 'In The Eyes of the Forgotten', which in 2007 released 'Welcome to the Plague Year", recorded in the Studio Four Aces. They have received recognition abroad due to the second EP , which they skated tours in the UK, the Netherlands and Belgium.

The band signed with Rising Records (Trigger The Bloodshed, Mendeed) in the UK and Europe in early 2008 to record a full length album. 'Humanity' was released August 10th 2009 , the group has worked hard over the years to release their debut album