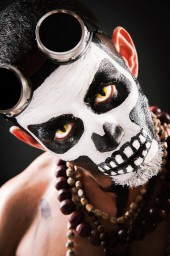 The group refers to their style as "Rap Nuclear" ("nuclear rap"), stressing their belonging to the capital of the nuclear industry of Russia - the city of Ozersk.

Musicians have mixed all your favorite sound and get explosive hodgepodge.

In January 2012, the band released their first album with the working title "BRUTALITY".

The release was instantly lit on all Russian influential rap resources, received a lot of positive feedback. On the title track of the album – Brutality – the band shot the clip, which entered the TOP of the most hardened and brave of clips according to the TV channel "A-ONE". Video received airplay on channels "RAP.RU", "Muz TV" and "RU.TV".

Other video works of the project (balls, Leaves, BA-BA-DOOK, Boodoo People, Matza, and others) also have high popularity and views on YouTube number in the millions.