Surganova and orchestra on March 4 in Smolensk 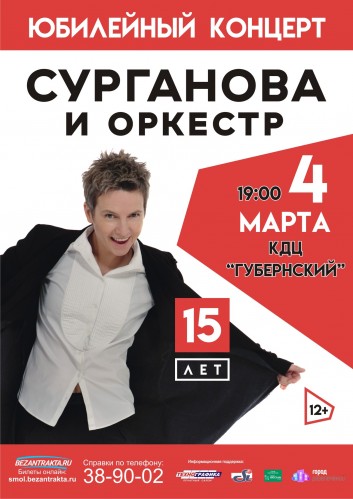 15 years of the group "SURGANOVA AND ORCHESTRA"!

This group is admired as the young lovers of live music, and experienced music lovers.

– in stagnant music industry Surganova allows himself the independence from format and break stereotypes;

– not being formatted, it stays fashionable and current in the top Russian artists;

– it creates a cozy and intimate atmosphere in chamber theatres, and thus collects the main floor of the country - thousands of Crocus and the Moscow Kremlin;

only she could put the poems of Joseph Brodsky and Anna Akhmatova to the music so that it is not a shame;

only she's different: releasing a loud rock album, can dramatically change the trajectory, to take a part a string Quartet and to visit all the countries of the Philharmonic with a classical program, and then to release a disco Remix with a trendy DJ;

Only after her concerts the audience say, "You changed my life!" write a hundred letters about how her songs helped to survive and to survive difficult times as they breathed in the people the joy of life and hope.

Her concerts are waiting, like your own personal holiday. After all, "SURGANOVA AND ORCHESTRA" is tens of thousands of outstanding, diverse people who are actively involved in the life of the group. Famous flash mobs, feedback, heated discussions in social networks and the possibility of each spectator to be heard - a visiting card of the group.

The ability to combine incongruous – the main feature of the team.

Svetlana - welcome to key television and radio , the headliner of the major rock festivals of the country and is a favorite Pushkin poetry festival, the speaker of Tsvetaeva Museum, the visitor of "the rut" Vysotsky. The winner of karaoke TV show "Live sound" and is a subtle interpreter of poetry on the stage of BDT.

"Surganova and Orchestra" - the owners of several "gold discs", and also (attention!) the live band of the country, the leader of the hit parade "Nashe radio".

Global jubilee tour, dedicated to the 15th anniversary of the group includes nearly 100 cities of Russia, Europe and the United States.

On the big anniversary concerts the audience waiting for new experiments, gifts and of course all of that has become legendary hits of the band!