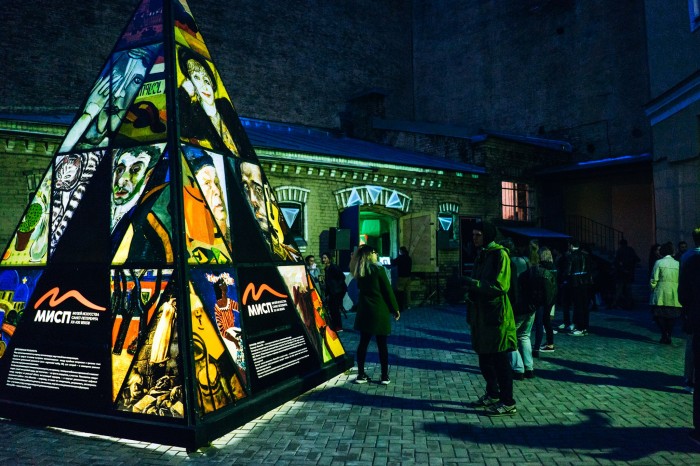 "Night of museums" is an annual event dedicated to the International day of museums. Petersburg museums, large and small, traditionally open their doors to visitors in the evening and night, and prepare a special program: one day exhibitions, concerts, performances, author's excursions, master-classes, historical reconstruction. Iicp is no exception, this night is for you: tours, concerts, performances, DJ sets, quests, lectures and film screenings.

The program "NIGHT of MUSEUMS – 2018" in the iicp will start on 19 may at 19.00 a lecture-discussion of "Early age and emotional relationship with her mother - as the basis of personality development". It will hold a specialist in the psychology of childhood Tatyana Gileva. Foundations of human development are laid in early childhood. We talk not only about the psychological features of this period, but also about what kind of expression he finds in the visual arts.

At 19.00 in the "Blue room" iicp on the fourth floor will be showing the film "the Legend of Caspari Hauser" David Manuli. Man of mystery Kaspar Hauser was discovered in the market square of Nuremberg on 26 may 1828. The teenager was dressed in a simple peasant dress, went bad, hardly spoke, repeating only two meaningless phrase for him — "don't know" and "I want to be a cavalryman, as my father." Foundling soon became the object of attention of the medical community trying to understand the provocative behavior and the origin of Hauser. Assigned to it psychic abilities was nothing more than an invention of one of his patrons. Starring: Vincent Gallo, Silvia Calderoni, Claudia Gerini, etc. Music: Vitalic. A ticket for a session costs 200 rubles and is not included in the price of a single ticket "Night of museums-2018". 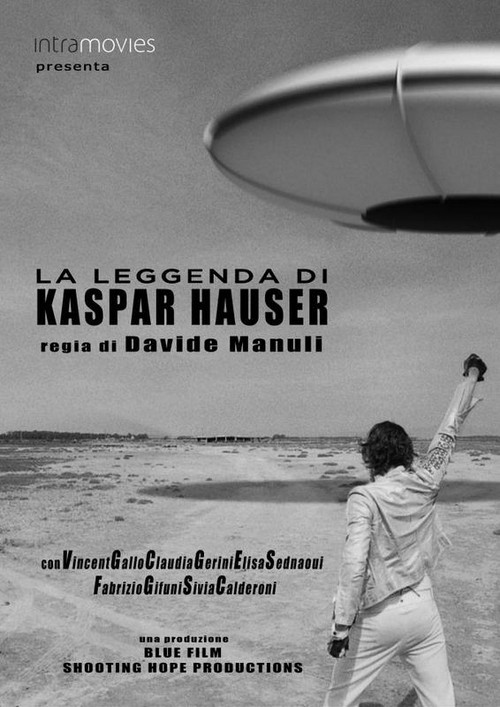 The whole evening in the courtyard space of the street "Theatre Whose name" will be plastic with drawings of "the Childhood that....". The courtyard of the Museum will magically turn into an interactive space, dominated by the vivid imagination of a child. Viewers will be able to see the Princess and Prince, adult miners, playing in the sandbox, the frog Princess and sad clowns, "clumsy" smeasy guests. The performance of the play: 19:30 – 20:00 / 21:45 – 22:15 / 23:30 – 00:00

At 20.00 in the Museum's courtyard will host a performative DJ set the art group "DIAMOND" (music/plastic/video art). The live set of electronic music from Alexander Narrator will embody parental educational beginning. He is immersed in noise, drones and rhythms associated with uterine sounds. The characteristic spatial environment will recreate video art Alexandra Soko. In the eyes of the audience will occur to pictorial, graphic and sculptural works. Artists put yourself in the place of a child exposed to educational settings. The works of authors will show how these situations are refracted in the minds of every creative.

At 21.00 in the courtyard starts performative DJ-set Association "Bohemian Movement" (live wind instruments/electronic music/dance improvisation). It combines the performance of instrumental funk/hip hop musician Dmitry Ermolinskiy, the founder of the team Master So Hi techno DJ Dmitry Larionov (2dCuBe). Mixing, on the one hand, opposite music genres, and on the other a club and a live brass sound, the authors once again show us that all the boundaries of conventional music, as the boundaries of age: childhood and adulthood.

At 22.15 in the courtyard of the Museum will take place the concert of Super Collection Orchestra, which will complete the evening program. This team last year was able to strongly make their presence felt on the music city map. Experiencing all the joys and sorrows of growing up, the group changed the composition, make new friends, have performed at various venues in Moscow and St. Petersburg, and was noted among the participants several status urban festivals. But retaining their style – free pop. Not finding the right words to describe their music, the band has invented a new musical genre - a mixture of jazz, romantic ballads, techno, old rock-n-roll and, as added by the musicians themselves, of love.

At 23.00 in the courtyard of the Museum will begin a visual generative DVJ-set of Vladimir Katasonova "Childhood. Animating the canvas". Katasonov is a famous St. Petersburg media artist, resident art gallery "Borey", will continue its digital experiments, projecting the paintings from the Museum's collection and the exhibition "Carefully, children!" on the firewalls of the yard. In the framework of the audiovisual installation accompanied by the mystical sounds copyright music virtual canvas will be transformed, "they live again" in the eyes of the surprised audience.

Simultaneously with the DVJ set at 23.00 in the courtyard of the Museum will begin a theatrical performance "blow-up", which gradually moves into space, "the Blue room". "We all come from childhood" - this thesis try strength Outhetic actors Theatre in their new production. In fact, "blow-up" is a modern interpretation of the classic problems of fathers and children. The main character is a man in a white mask, a suit and a suitcase. Before the show it can be found in the courtyard of the Museum, taking pictures of ridiculous children's drawings on the wall. Further, the performance will move to another space, the "Blue room" on the fourth floor, which in the framework of the performance will become a laboratory. There is a faceless character, slowly perform a ritual developing. Interacting with each photo, the hero stares at her while on the wall will not show through pictures from his childhood... on the one hand, it is a story about loneliness and alienation of an adult. On the other – the play raises a whole heap of important and topical questions: what memory is, whether any person is a projection of their parents? The performance will be played two times: 23.00 – 23:40 and 02:00 – 02:40. Cost: 200 rubles (the cost of a single ticket "Night of museums" is not included) 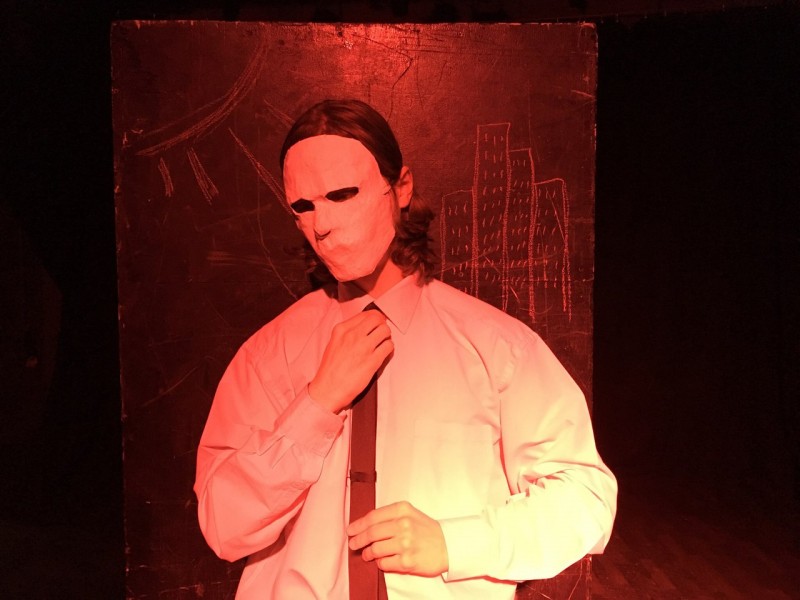 At 00: 00 with the support of the Institute for the study of street art and residences for art and technology "Kvarteret" in the courtyard of the Museum will begin a silent party-experiment "Dancing in silence". The organizers offer to take in the atmosphere of silent discos, to be weird among the weird. To rebuild the reality, swapping in simple terms. Outside, the silence inside the music. We dance alone in a crowded courtyards, immersed in the sound, and emerges into the outside world when they want to get someone else. Headphones — the fascinating ambient from GhostNoir, Måla and Rzeng, and rhythmic sets from mom Russian drum&bass dj Zemine for visuals — vj improvisation in real time from Sasha Kojo. To connect to a silent disco you must bring your smartphone and headphones. Will continue this amazing experiment until 2am. Producers: MOTOR & KOROL

At one o'clock in the iicp will be a presentation of the educational project graduation students "Art SKULA school". At 2:30 in the exhibition halls starts ADULT'S TALK – the author's interactive tour of the exhibition "Caution, children!". Exhibition space can be a platform for discussion and objects of the exhibition is to unsettle, to disturb and cause ambiguous and sometimes provocative feelings. Lively dialogue, focus on the thoughts and emotions of the participants - all of this might change the idea about the exhibition and the principles of its organization. This is the ADULT'S TALK. Leading: Yulia Kuznetsova, Nikolay Koryagin. Those wishing to participate in a live debate should register by e-mail: Ame_01@mail.ru

At 03.00 in the "Blue Room" - a film Yaromila Iresa "Valeria and the week of wonders" (1970, Czechoslovakia). It's a horror about a 13 year old Valeria, entering adulthood and experiencing first love Hobbies. The film is on the verge of reality and dream, stories, lyrics and somnambulistic nightmares. Cost of session: 200 rubles (not included in the price of a single ticket "Night of museums")

At the same time you can make a quest through the exhibition "Caution, children!" (a group of participants to 10 people). Large-scale exhibition "Carefully, children!" is held at the Museum from 16 may to 15 July. All in the exhibition the project involved more than 110 authors - painters, schedules, sculptors, artists of video-art. They all belong to different generations, are representatives of the most different directions: the traditional classical art, underground art, primitivism, hyperrealism, numerous topical currents today. Provocative and humble, romantic and harsh revealed to us the era of the twentieth century, hallucinatory, crazy, dark, funny, looks twenty-first century. So viewer will have the theme of childhood in the iicp.

Tickets at the Museum ticket office from may 16, and online http://artnight.ru/tickets