For the first time in Bobruisk"! Festival "B-FEST 2" 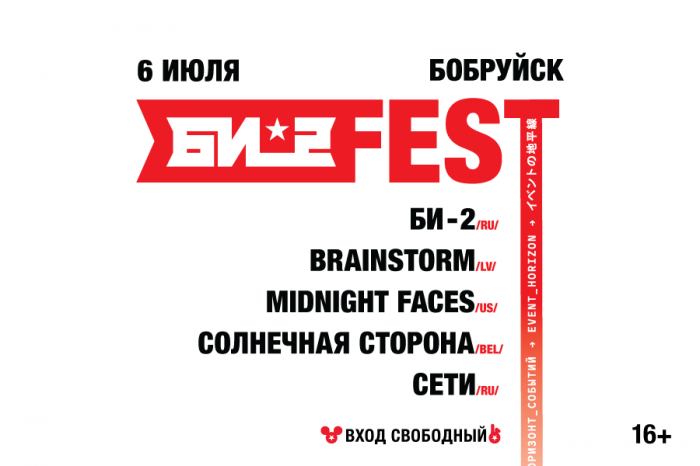 6 July, a group of Bi-2 in Bobruisk organize your own music festival - Bi-2 FEST. ADMISSION IS FREE!

Shura: We have long dreamed to make your fest - a huge open-air, to get to which will all, without exception.

The venue, the Belarusian town of Bobruisk, was not chosen by chance: it was here in the late 80's early musical history of the band Bi-2.

The line-up is special, too - each group to take part in the festival, takes its place in the history of Bi-2.

Shura Bi-2: "the Sunny side" is a group which, in principle, there was a group of Bi-2. This team

and songwriter that was my uncle Mikhail Karasev, was incredibly popular in Belarus in the 80s and had a huge impact on us at the beginning of our creative journey. Moreover, some of their songs, such as "Fool" and some other tracks that we've converted and included in its repertoire. We were able to recreate this group, we contacted two original members - Olga Petrykina and Vadim Sazhin, they gathered musicians and our festival "the Sunny side" will play songs from the first half of the 80s.

Shura: "Network" is a group of our flutist and co-author of the texts, Yana Nikolenko. Everyone knows the song "Chains" - Smile. The Aniko coming out this year a new album and a performance at our festival will be "Networking" after a long hiatus.

Shura Bi-2: This group even imagine separately is not necessary. Brainstorm - our old friends, they participate in our projects and in the Studio and on stage. It is a great team, really want to show them in Bobruisk.

Shura Bi-2: Team Midnight Faces - our friends from Los Angeles. I think this is one of the most interesting post-punk groups of the present time. Album Heavenly Bodies is just great, I recommend to listen to! And to hear and see the band LIVE you will not only at our festival in Bobruisk on July 6, but at the Olimpiyskiy in Moscow on October 27.

B-2, of course, and will take the stage of the festival - the band will close the "Bi-2 FEST," a two-hour show "the event Horizon".

Come/come/come on B-FEST 2 in Bobruisk, and see for yourself and hear!