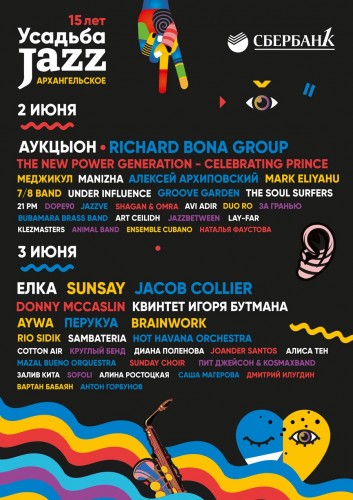 In the XIX estate of Prince Yusupov was a point of attraction for the most advanced and Bohemian audience of his time: here were held receptions with the participation of Pushkin, Karamzin, Stravinsky, Serov. Usadba Jazz festival, gathering the most sophisticated and savvy audience, continues this tradition in the twenty-first century. Over the years the festival has become one of the symbols of the “Arkhangelsk” – no wonder the centenary of the Museum coincides with the 15th anniversary of our festival. This summer you will find many unforgettable performances: stars of the first magnitude, and intelligent music on the stages of “takedowns” and “Aristocrat”, young and promising artists on the stage Gauge. And expanded VIP area, the art facilities, a large children's program (children under 10 are admitted for free) and many other attractions!

In fifteen years of existence, the Usadba Jazz festival has become one of the most beloved musical event of the year for Muscovites, Petersburgers, and inhabitants of Voronezh and Yekaterinburg. As well as the most famous Russian jazz festival abroad.

Among the participants of the previous years – acknowledged as jazz classics Yuseef Lateef and Branford Marsalis, and the relatively young stars such as Robert Glasper and Snarky Puppy and also favorite wide audience of Russian musicians "Aquarium", Igor Butman, Leonid Agutin and many others. Just history the festival has presented more than 1,000 musicians from all over the world. The festival is constantly discovering new names , arranges contests among pupils of music schools and universities and provides the most talented of them the stage. At the time, the festival became the first major launching pad for such well-known now musicians as Nino Katamadze & Insight, Anton Belyaev and Therr Maitz.

Another such open-air in Russia is simply not – noticed and repeated visitors, and professionals in the concert industry. And it's not just music: the festival team managed to create an environment where you want to be of anyone who thinks positively, appreciates good company, and just loves life. Each year surrounded by the remarkable architecture of Russian country estates and castles at the festival there are a variety of creative people: artists, designers, restaurateurs, poets, and many others. In cities such as Voronezh and Yekaterinburg Usadba Jazz has become a real hotbed of culture, and set the new benchmark for events. The festival has taken its place in the international calendar of festivals, becoming a unique trademark of Russia in world cultural life.

Stage "Parter". On the biggest stage of the festival traditionally will be favorite musicians of different genres. Bright opening will be ethno-AYWA group (France) multitool-alista Adila Smaali performing traditional songs of Maghreb countries with the introduction of the elements of funk, reggae and rock. The ancient tradition refers in his work and singer Peruque(Australia), whose voice is often called the healing, and the diva – master "vocal yoga". Another of the headliners will be the legendary band "Auktyon", this year, by the way, marking the 40th anniversary. Also on the stage of the "orchestra" will perform, who retired in 2007 in solo sailing, member of the group 5'Nizza SunSay.

"Sberbank First Aristocrat". This is a special scene for lovers of fine music. On the first day of the festival we will be exhibiting musicians from around the world, traded in his work to folk music. This is already a favorite with guests of the festival the bass virtuoso Richard Bona Group(USA). And the world famous Alexey arkhipovskiy – the man who practically re-invented the balalaika. And musician Mark Eliyahu(Israel) playing the Pontian Lyra the traditional music of the East. June 3 on the stage "Aristocrat" will perform jazz trendsetters: sensational one-man band Jacob Collier (UK), who became famous thanks to Youtube, the new York saxophonist Donny McCaslin (USA), who participated in the recording of the last lifetime album David Bowie Blackstar, well, one of the most famous Russian jazz musicians in the world, Igor Butman with his quintet.

Stage "Jazz Club". On the first day of the festival on this stage you will have the opportunity to hear modern, youth jazz musicians Under Influence, 21 PM.
You will be able to take part in dance workshops of the project JAZZBetween, listen to interesting sets of blending jazz with electronics from the Association of musicians and graffiti artists project DOPE90.
A combination of electronic and Live DJ set will delight us project JAZZVE.
Moscow producer and DJLayFar the main driving force of soulful, eclectic and deep house music in Russia will present a special program.
3 Jun on this site you will get acquainted with the traditions of Latin jazz performed by Cuban musicians Hot Havana Orchestra, project Sambateria Arthur Gazarov, hear Indonesian trumpeter, Rio Sidiq, and also be able to participate in master classes in Latin dances.
On this day, on the stage also were winners of the creative competition Usadba JAZZ Sochi 2017 group JAZZ friends, and the Cotton Air. A special event during the festival will be a performance by the winner of the musical contest in the social network VK.

The jam session at Semushkina. Separate, special and almost chamber stage will be "Kvartyrnyk at Semushkina" where the President and inspirer of the festival Maria semushkina will gather the most talented musicians that have become real residents of St. Petersburg and participants of the eponymous program on Culture Radio. The magical fusion, the atmosphere of co-creation, improvisation will reign on this unique site.

"Usadba Jazz Kids". Usadba Jazz is a festival for the whole family including the little ones. At "Usadba Jazz Kids" children of all ages will be able to get acquainted with the history of music in a playful and interactive way. Promise that it will be interesting not only for children, but also the most demanding adult!

The details in the VC: https://vk.com/usadba.jazz.moscow