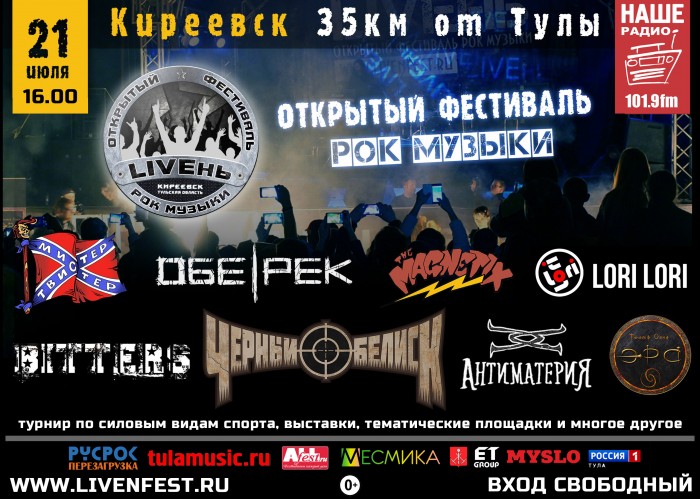 LIVEнь is one of the biggest events in the Tula region and easily competes with similar festivals all over Russia. This year, festival organizers plan to host at least three thousand guests from different regions of the country and abroad.

The participants of the festival 2018 will be the iconic group "the Black Obelisk"; going leaps and bounds to the top of the rock of Olympus Moscow team "LORILORI"; one of the best psychobilly bands in Europe "theMagnetix"; all the favorite and expected "Both rivers"; legendary rockabilly band "Mister Twister"; Tula group "Antimatter", which presents the guests of the festival a unique program called "My defence", consisting of songs of Egor Letov and "Civil Defense"; the young and the restless "Bitters". A vivid and memorable end of the festival will be a performance of theatre of fire Era, which will show viewers a program that will balance on the brink of magic the emerald fairy tale and reality.

In addition to performances of rock teams, the festival offers visitors the tournament on the strength sports, participation in which will be able to take all comers, master classes, exhibitions and fairs. For a comfortable stay on the territory of the festival will also feature outdoor cafes, recreation areas and other facilities. The organizers of the event have not forgotten about the younger fans of rock music: many amusements will not get bored neither children nor their parents.

It is worth Recalling that LIVEнь is a non – profit festival. The entrance to the fest, as well as Parking and other amenities free.

Despite the fact that LIVEнь young festival, it has already established itself as one of the most important and expected events of the region. And the fact that the organizers made this event completely free, will attract the attention of not only fans of rock music, but also those who just want to spend a day and relax in nature.